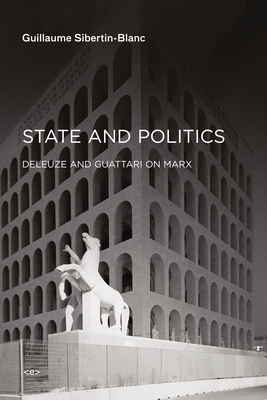 A detailed analysis of how Deleuze and Guattari's work engaged with the upheavals of their time.

Often approached through their "micropolitics of desire," the joint works of Deleuze and Guattari are rarely part of the discussion when classical and contemporary problems of political thought come under scrutiny. Yet if we follow the trajectory from Anti-Oedipus (1972) to A Thousand Plateaus (1980), it becomes clear that these problems were redeveloped during a period of historical transition marked by the end of the wars of decolonization, the transformation of global capitalism, and by recombinations of the forces of collective resistance that were as deep as they were uncertain.

In State and Politics, Guillaume Sibertin-Blanc measures how Deleuze and Guattari engage with the upheavals of their time by confronting their thought with its main interlocutor, Marxism, with its epistemological field (historical materialism), with its critical program (the critique of political economy), and with its political grammar (class struggle). Three new hypotheses emerge from these encounters: the hypothesis of the Urstaat, embodying an excess of sovereign violence over the State apparatus and over its political investments; the hypothesis of a power of the "war machine" that States can only ever appropriate partially, and to which they can be subordinated; and the hypothesis of an excess of "destructivism" in capitalist accumulation over its productive organization.

These three excesses betray the haunting presence of the period between the wars in the political thought of Deleuze and Guattari, but they also allow Deleuze and Guattari's ideas to communicate with contemporary thinkers of the impolitical. The reader discovers not only a new political theory but also the plurality of ways in which extreme violence--violence capable of destroying politics itself--can arise.