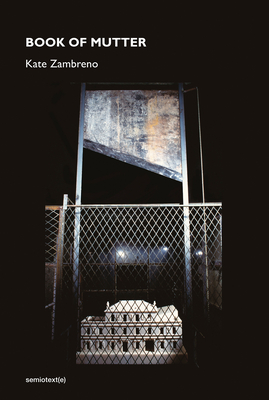 A fragmented, lyrical essay on memory, identity, mourning, and the mother.

Writing is how I attempt to repair myself, stitching back former selves, sentences. When I am brave enough I am never brave enough I unravel the tapestry of my life, my childhood.
—from Book of Mutter

Composed over thirteen years, Kate Zambreno's Book of Mutter is a tender and disquieting meditation on the ability of writing, photography, and memory to embrace shadows while in the throes—and dead calm—of grief. Book of Mutter is both primal and sculpted, shaped by the author's searching, indexical impulse to inventory family apocrypha in the wake of her mother's death. The text spirals out into a fractured anatomy of melancholy that includes critical reflections on the likes of Roland Barthes, Louise Bourgeois, Henry Darger, Theresa Hak Kyung Cha, Peter Handke, and others. Zambreno has modeled the book's formless form on Bourgeois's Cells sculptures—at once channeling the volatility of autobiography, pain, and childhood, yet hemmed by a solemn sense of entering ritualistic or sacred space.

Neither memoir, essay, nor poetry, Book of Mutter is an uncategorizable text that draws upon a repertoire of genres to write into and against silence. It is a haunted text, an accumulative archive of myth and memory that seeks its own undoing, driven by crossed desires to resurrect and exorcise the past. Zambreno weaves a complex web of associations, relics, and references, elevating the prosaic scrapbook into a strange and intimate postmortem/postmodern theater.

The composition of this book requires the reader to participate in constructing links, noticing patterns, and making meaning; it is what Barthes would call a 'writerly text,' welcoming the reader into its many entrances and possibilities. Zambreno's work is an exercise in semiotics, a study of meaning-making, for things that seem intimate, foundational, and basic to being human: history, memory, mother, mourning.—Publishers Weekly, (starred review)—

Above all, Book of Mutter is a work of tone; it expresses a failure to transcend grief, written from a place of guilt and shame, in halting and inarticulate gestures...Writing may not change anything, may not heal or even console—but, like Bourgeois's Cells, it creates a space in which formlessness, pain and chaos are enclosed and held like holy relics in a church.

The book is relentless in its search for meaning and its simultaneous refusal of simplistic acts of closure. Even its structure seems designed to reflect pain intermittently avoided and confronted. Zambreno places her memories into a kind of assemblage piece, where the form shifts with its underlying emotions.

Book of Mutter is ultimately a self-consciously unsentimental yet deeply moving book. The distance of its aesthetic styling belies an intense vulnerability and love that emerges through a number of affecting details: her father's handwriting continuing her mother's gardening journal, memories of 'fraught yet tangy' meatloaf, a cream-colored dress with flowers that almost pains the narrator to mention. In a craft lecture reproduced in Semiotext(e)'s magazine Animal Shelter, Zambreno writes, 'All I want is a literature both tender and grotesque.' With Book of Mutter, she finds it.

Among its many concerns—the death of her mother, grief, autobiography, photography, memory—are the conventions of book-making itself: It seems as invested in unforming itself as it is in forming itself, and the result exists outside of any of the familiar expectations of genre.

The slim book of bristling fragments is heavy but moves swiftly, as if laid down in one long fever dream.

As with all her books, Zambreno's sharp and stylish intellectual masonry, her careful gathering of evidence, is a kind of (intentionally) incomplete catharsis. She collects anecdotes like novelist David Markson, but unlike him—he of the impersonal (and emotionally devastating) story—she builds an altar to her own past, these anecdotes both personal and yes, sometimes political.

Barthes, Handke, Louise Bourgeois join the chorus of citations scattered like waymarks through this mournful, fragmentary text, which dwells around, without answering – as though the attempt were the only answer possible—the question, which in the text is posed without a question mark: 'What does it mean to write what is not there. To write an absence.'

Mutter is unapologetically intellectual, and unapologetically bodily. But while this reader enjoys an intertextual puzzle as much as the next, I found the most compelling threads within Mutter were those bearing witness to the ordinary; sites of lament and also startling beauty.

Kate Zambreno's Book of Mutter is an elegy, an archive, a palimpsest of fragmented memory...It's as if the book's language has broken with the weight of sorrow.

The distance of its aesthetic styling belies an intense vulnerability and love that emerges through a number of affecting details: her father's handwriting continuing her mother's gardening journal, memories of 'fraught yet tangy' meatloaf, a cream-colored dress with flowers that almost pains the narrator to mention.

Kate Zambreno is the author of the novels Green Girl and O Fallen Angel as well as the nonfiction Heroines and Book of Mutter (both published by Semiotexte(e)).
Loading...
or support indie stores by buying on