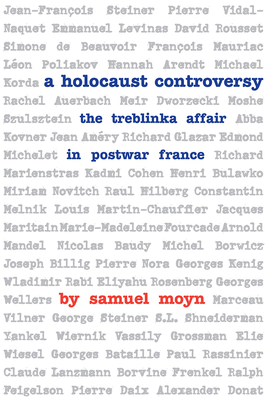 How has the world come to focus on the Holocaust and why has it invariably done so in the heat of controversy, scandal, and polemics about the past? These questions are at the heart of this unique investigation of the Treblinka affair that occurred in France in 1966 when Jean-Francois Steiner, a young Jewish journalist, published Treblinka: The Revolt of an Extermination Camp. A cross between a history and a novel, Steiner’s book narrated the 1943 revolt at one of the major Nazi death camps. Abetted by a scandalous interview he gave, as well as Simone de Beauvoir’s glowing preface, the book shot to the top of the Parisian bestseller list and prompted a wide-ranging controversy in which both the well-known and the obscure were embroiled. Few had heard of Treblinka, or other death camps, before the affair. The validity of the difference between those killing centers and the larger network of concentration camps making up the universe of Nazi crime had to be fought out in public. The affair also bore on the frequently raised question of the Jews’ response to their dire straits. Moyn delves into events surrounding the publication of Steiner’s book and the subsequent furor. In the process, he sheds light on a few forgotten but thought-provoking months in French cultural history. Reconstructing the affair in detail, Moyn studies it as a paradigm-shifting controversy that helped change perceptions of the Holocaust in the French public and among French Jews in particular. Then Moyn follows the controversy beyond French borders to the other countries—especially Israel and the United States—where it resonated powerfully. Based on a complete reconstruction of the debate in the press (including Yiddish dailies) and on archives on three continents, Moyn’s study concludes with the response of the survivors of Treblinka to the controversy and reflects on its place in the longer history of Holocaust memory. Finally, Moyn revisits, in the context of a detailed case study, some of the theoretical controversies the genocide has provoked, including whether it is appropriate to draw universalistic lessons from the victimhood of particular groups.

Samuel Moyn is the Henry R. Luce Professor of Jurisprudence at Yale Law School and professor of history at Yale University. He is the author of numerous books, including Not Enough: Human Rights in an Unequal World and A Holocaust Controversy: The Treblinka Affair in Postwar France.
Loading...
or
Not Currently Available for Direct Purchase