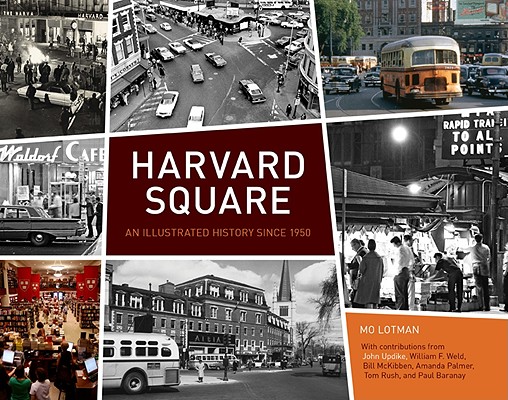 An Illustrated History Since 1950

What do Barack Obama, Samuel Beckett, Fidel Castro, Joan Baez, Conan O’Brien, Natalie Portman, and Dwight D. Eisenhower have in common? Their footsteps have all crossed paths in Harvard Square. This well-trod patch of Cambridge turf at the corner of the United States’ most renowned university has long been a crossroads where poetry, retailing, politics, design, performance, and every other cultural endeavor intersect.
From the square’s tweedy aspect in the 1950s through its many transformations in the ’60s,’70s, and beyond, author Mo Lotman gives a decade-by-decade account of Harvard Square’s history, traditions, and lore. The bookstores, the billiard parlors, the barbershops, the booze and burger joints: they’re all here. Based on interviews with more than a hundred of the square’s denizens, illustrated with archival photographs, and graced with texts by John Updike, Bill McKibben, Governor Bill Weld, and others, Harvard Square brings “the smartest urban space in America” to vivid life.

Mo Lotman is a freelance writer and graphic designer. He lives in Somerville, Massachusetts.
Loading...
or
Not Currently Available for Direct Purchase