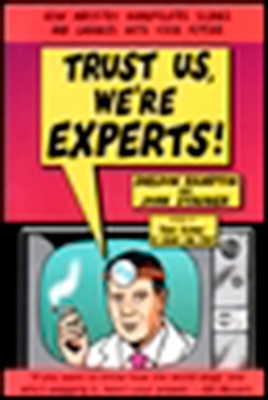 How Industry Manipulates Science and Gambles with Your Future

The authors of Toxic Sludge Is Good for You! unmask the sneaky and widespread methods industry uses to influence opinion through bogus experts, doctored data, and manufactured facts.

We count on the experts. We count on them to tell us who to vote for, what to eat, how to raise our children. We watch them on TV, listen to them on the radio, read their opinions in magazine and newspaper articles and letters to the editor. We trust them to tell us what to think, because there’s too much information out there and not enough hours in a day to sort it all out.

We should stop trusting them right this second.

In their new book Trust Us, We’re Experts!: How Industry Manipulates Science and Gambles with Your Future, Sheldon Rampton and John Stauber, authors of Toxic Sludge Is Good For You, offer a chilling exposé on the manufacturing of "independent experts."

Public relations firms and corporations know well how to exploit your trust to get you to buy what they have to sell: Let you hear it from a neutral third party, like a professor or a pediatrician or a soccer mom or a watchdog group. The problem is, these third parties are usually anything but neutral. They have been handpicked, cultivated, and meticulously packaged in order to make you believe what they have to say—preferably in an "objective" format like a news show or a letter to the editor. And in some cases, they have been paid handsomely for their "opinions."

You think that nonprofit organizations just give away their stamps of approval on products? Bristol-Myers Squibb paid $600,000 to the American Heart Association for the right to display AHA’s name and logo in ads for its cholesterol-lowering drug Pravachol. SmithKline Beecham paid the American Cancer Society $1 million for the right to use its logo in ads for Beecham’s Nicoderm CQ and Nicorette anti-smoking ads.

You think that a study out of a prestigious university is completely unbiased? In 1997, Georgetown University’s Credit Research Center issued a study which concluded that many debtors are using bankruptcy as an excuse to wriggle out of their obligations to creditors. Former U.S. Treasury Secretary Lloyd Bentsen cited the study in a Washington Times column and advocated for changes in federal law to make it harder for consumers to file for bankruptcy relief. What Bentsen failed to mention was that the Credit Research Center is funded in its entirety by credit card companies, banks, retailers, and others in the credit industry; that the study itself was produced with a $100,000 grant from VISA USA, Inc. and MasterCard International; and that Bentsen himself had been hired to work as a credit-industry lobbyist.

You think that all grassroots organizations are truly grassroots? In 1993, a group called Mothers Opposing Pollution (MOP) appeared, calling itself "the largest women’s environmental group in Australia, with thousands of supporters across the country." Their cause: A campaign against plastic milk bottles. It turned out that the group’s spokesperson, Alana Maloney, was in truth a woman named Janet Rundle, the business partner of a man who did P.R. for the Association of Liquidpaperboard Carton Manufacturers—the makers of paper milk cartons.

You think that if a scientist says so, it must be true? In the early 1990s, tobacco companies secretly paid thirteen scientists a total of $156,000 to write a few letters to influential medical journals. One biostatistician received $10,000 for writing a single, eight-paragraph letter that was published in the Journal of the American Medical Association. A cancer researcher received $20,137 for writing four letters and an opinion piece to the Lancet, the Journal of the National Cancer Institute, and The Wall Street Journal.


Praise For Trust Us, We're Experts PA: How Industry Manipulates Science and Gambles with Your Future…

"If you want to know how the world wags, and who’s wagging it, here’s your answer. Read, get mad, roll up your sleeves, and fight back. Rampton and Stauber have issued a wake-up call we can’t ignore." —Bill Moyers

"If you've ever wanted to see a TV spin doctor hog-tied and dragged through the streets, Rampton and Stauber do the next best thing. This book is modern muckraking of the best variety, skewering hype and showing us how to separate real experts from snake oil salesmen and hired corporate know-it-alls."  —Jim Hightower

"Trust Us, We’re Experts is a brilliant piece of investigative journalism and a powerful vaccine against the stupefying effects of the corporate PR machine. Spread it around!" —Barbara Ehrenreich

"Finally a long-overdue expose of the shenanigans and subterfuge that lie behind the making of experts in America. Rampton and Stauber take us behind the scenes, inside corporate boardrooms, where marketing chiefs literally manufacture their own ‘independent experts’ to defend their products and practices. This groundbreaking book gives us a first look into the seamy side of corporate public relations, where academic experts of every stripe and kind are bought in various ways. An eye-opener." —Jeremy Rifkin

"This is a great book, and I think you should buy it. But since the point of the book is to get you to think for yourself and not trust experts, perhaps you should thumb through it yourself for a little while. I think of it as a field guide to the kinds of lies you can expect from the information age." —Bill McKibben

"Rampton and Stauber's book explodes the cult of expertise and shows how easily the media and their readers can be misled by public relations claims masquerading as science. This book makes the best case I know for complete disclosure of the financial conflicts of interest of scientists and the corporate influence on university research." —Sheldon Krimsky, Tufts University Professor, author of Hormonal Chaos: The Scientific and Social Origins of the Environmental Endocrine Hypothesis