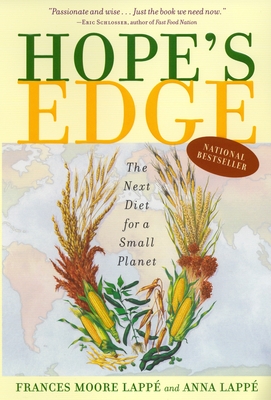 The Next Diet for a Small Planet

Thirty years ago, Frances Moore Lappé started a revolution in the way Americans think about food and hunger. Now Frances and her daughter, Anna, pick up where Diet for a Small Planet left off. Together they set out on an around-the-world journey to explore the greatest challenges we face in the new millennium. Traveling to Asia, Africa, Latin America, and Europe, they discovered answers to one of the most urgent issues of our time: whether we can transcend the rampant consumerism and capitalism to find the paths that each of us can follow to heal our lives as well as the planet.

Frances Moore Lappé is a democracy advocate and world food and hunger expert who has authored or co-authored 19 books, including the three-million copy Diet for a Small Planet. Her most recent work, released by Beacon Press in September 2017, is Daring Democracy: Igniting Power, Meaning, and Connection for the America We Want.

She is the cofounder of three organizations, including Food First: The Institute for Food and Development Policy and, more recently, the Small Planet Institute, a collaborative network for research and popular education seeking to bring democracy to life, which she leads with her daughter Anna Lappé.

Anna Lappé holds an M.A. from Columbia's School of International and Public Affairs and is the co-author of Grubb and author of Diet for a Hot Planet. Named one of Time magazine's "Eco-Who's Who," she is a founding principal of the Small Planet Institute. Anna's writing has been published in the Washington Post, Los Angeles Times, International Herald Tribune, and Canada's Globe and Mail. She writes a bi-monthly column on sustainability for Spirituality and Health and contributes book reviews to the San Francisco Chronicle and the New Scientist.
Loading...
or support indie stores by buying on