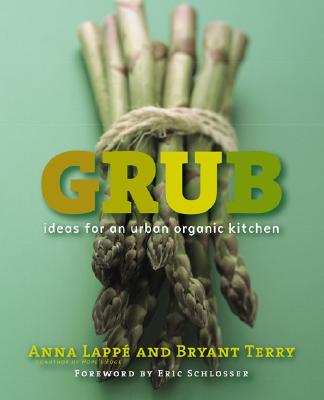 Ideas for an Urban Organic Kitchen

In the past few years, organic food has moved out of the patchouli-scented aisles of hippie food co-ops and into three-quarters of conventional grocery stores. Concurrent with this growth has been increased consumer awareness of the social and health-related issues around organic eating, independent farming, and food production.

Combining a straight-to-the-point exposé about organic foods (organic doesn't mean fresh, natural, or independently produced) and the how-to's of creating an affordable, easy-touse organic kitchen, Grub brings organics home to urban dwellers. It gives the reader compelling arguments for buying organic food, revealing the pesticide industry's influence on government regulation and the extent of its pollution in our waterways and bodies.

With an inviting recipe section, Grub also offers the millionsof people who buy organics fresh ideas and easy ways to cook with them. Grub's recipes, twenty-four meals oriented around the seasons, appeal to eighteen- to forty-year-olds who are looking for fun and simple meals. In addition, the book features resource lists (including music playlists to cook by), unusual and illuminating graphics, and every variety of do-it yourself tip sheets, charts, and checklists.

Anna Lappé is the co-author with her mother, Frances Moore Lappé, of the national bestselling Hope's Edge: The Next Diet for a Small Planet (Tarcher/Penguin 2002). Her second book, Grub: Ideas for an Urban Organic Kitchen, will be out from Tarcher/Penguin in Spring 2006. The co-founder of the Small Planet Institute and the Small Planet Fund, Anna's articles and op-eds have been widely published, appearing in The Washington Post, San Francisco Chronicle, Los Angeles Times, International Herald Tribune, and the Globe and Mail, among others. Anna is a sought after public speaker and commentator on food politics, globalization, and the media and has been featured in Organic Style, Utne, and O: The Oprah Magazine. In 2002, she was the first recipient of the Bioneers Youth Award, given annually to leaders under thirty who have made a national impact and in 2004 was included in Organic Style's "50 Environmental Power List." She is a Food and Society Policy Fellow, a national program of the WK Kellogg Foundation. A graduate of Brown University, Anna received her Masters in International Affairs from Columbia University. She has worked in South Africa, England, and France, and currently lives in Brooklyn, New York.
Loading...
or
Not Currently Available for Direct Purchase