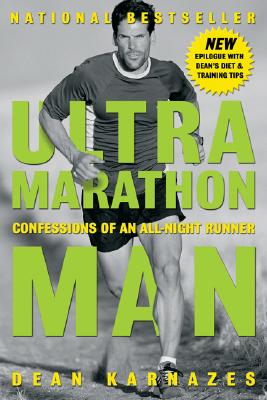 Confessions of an All-Night Runner

In one of his most ambitious physical efforts to date, Dean Karnazes attempted to run 50 marathons, in 50 states, in 50 days to raise awareness of youth obesity and urge Americans of all fitness levels to "take that next step."

Ultrarunning legend Dean Karnazes has run 262 miles-the equivalent of ten marathons-without rest. He has run over mountains, across Death Valley, and to the South Pole-and is probably the first person to eat an entire pizza while running. With an insight, candor, and humor rarely seen in sports memoirs (and written without the aid of a ghostwriter or cowriter), Ultramarathon Man has inspired tens of thousands of people-nonrunners and runners alike-to push themselves beyond their comfort zones and be reminded of "what it feels like to be truly alive," says Sam Fussell, author of Muscle.

And in the new paperback edition, Karnazes answers the two questions he was most asked on his book tour:

- What, exactly, do you eat?
- How do you train to stay in such good shape?


Praise For Ultramarathon Man: Confessions of an All-Night Runner…

"Full of euphoric highs. Rusisng with Karnazes [is] like setting up one's easel next to Money or Picasso... His book describes a journey into distance running that is much less about sweat than about the emotional terrain that unfolds at the frontier of endurance."
--The New York Times

"[Karnazes'] spirited memoir... can help mere mortals who want to push past their perceived limits or simply jump-start their sedentary lives."
--Chicago Tribune

"There is clearly something Nietzschean in Karnaze's makeup...that whatever doesn't kill you makes you stronger.'
--Los Angeles Times

"An exhibition of unadulterated courage and mental and physical stamina [for] anyone who likes to read about ordinary people doing extraordinary things."
--Boston Globe

"[Dean is] like a comic book superhero who remains undercover by day, every bit the unremarkable family man."
--The London Daily Telegraph

"A real life Forrest Gump... [Karnazes] has pushed his body to limits that are beyond masochistic. They're inhuman."
--Newsday

Dean Karnazes, who was named one of the Top 10 Ultimate Athletes by Outside magazine, is president of EnergyWell Natural Foods in San Francisco.
Loading...
or support indie stores by buying on