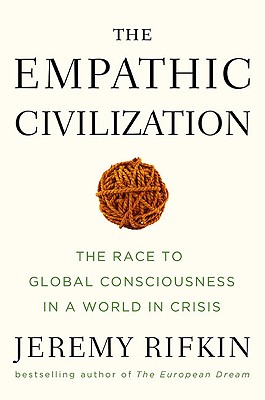 The Race to Global Consciousness in a World in Crisis

"One of the leading big-picture thinkers of our day" (Utne Reader) delivers his boldest work in this erudite, tough-minded, and far-reaching manifesto.

Never has the world seemed so completely united-in the form of communication, commerce, and culture-and so savagely torn apart-in the form of war, financial meltdown, global warming, and even the migration of diseases.

No matter how much we put our minds to the task of meeting the challenges of a rapidly globalizing world, the human race seems to continually come up short, unable to muster the collective mental resources to truly "think globally and act locally." In his most ambitious book to date, bestselling social critic Jeremy Rifkin shows that this disconnect between our vision for the world and our ability to realize that vision lies in the current state of human consciousness. The very way our brains are structured disposes us to a way of feeling, thinking, and acting in the world that is no longer entirely relevant to the new environments we have created for ourselves.

The human-made environment is rapidly morphing into a global space, yet our existing modes of consciousness are structured for earlier eras of history, which are just as quickly fading away. Humanity, Rifkin argues, finds itself on the cusp of its greatest experiment to date: refashioning human consciousness so that human beings can mutually live and flourish in the new globalizing society.

In essence, this shift in consciousness is based upon reaching out to others. But to resist this change in human relations and modes of thinking, Rifkin contends, would spell ineptness and disaster in facing the new challenges around us. As the forces of globalization accelerate, deepen, and become ever more complex, the older faith-based and rational forms of consciousness are likely to become stressed, and even dangerous, as they attempt to navigate a world increasingly beyond their reach and control. Indeed, the emergence of this empathetic consciousness has implications for the future that will likely be as profound and far-reaching as when Enlightenment philosophers upended faith-based consciousness with the canon of reason.

One of the most popular social thinkers of our time, Jeremy Rifkin is the bestselling author of The European Dream, The Hydrogen Economy, The Age of Access, The Biotech Century, and The End of Work. A fellow at the Wharton School's Executive Education Program, he is president of The Foundation on Economic Trends in Bethesda, MD.
Loading...
or
Not Currently Available for Direct Purchase