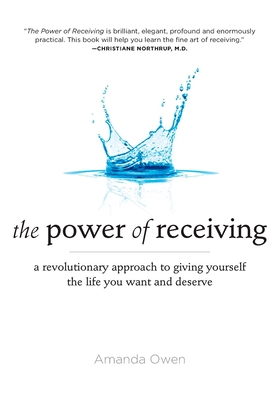 The Power of Receiving

Once in a blue moon an idea comes along that once heard seems so obvious that you wonder why somebody hasn't written about it before. Amanda Owen's The Power of Receiving: A Revolutionary Approach to Giving Yourself the Life You Want and Deserve presents a new paradigm for the 21st century-a philosophy that values receiving as much as giving and demonstrates that giving is enhanced when receiving is embraced. With the formula: Believe + Receive = Achieve, The Power of Receiving presents a wholly original yet easily accessible road map for people to follow, showing readers how to restore balance to their over-extended lives and attract the life they desire and deserve.

Inspiring stories are featured about people who have experienced life-altering results after becoming skilled Receivers, including Ken who regained his hearing after a devastating hearing-loss, Julie who met the man she would later marry, and Don who received an extra $1,000 a month in his pay check.

Based on over twenty years of research into the nature of receptivity and its link to manifestation, The Power of Receiving offers a unique vision for anyone seeking to create greater reciprocity in their relationships and more harmony and abundance in their lives.

Amanda Owen is a consultant-coach in the areas of spirituality, empowerment, and self-improvement, and has created the transformative Receive and Manifest workshops. Her research over the last twenty years into the nature of receptivity, along with her studies in quantum theory and Buddhism, led her to develop a system that helps people create the lives they want.
Loading...
or
Not Currently Available for Direct Purchase