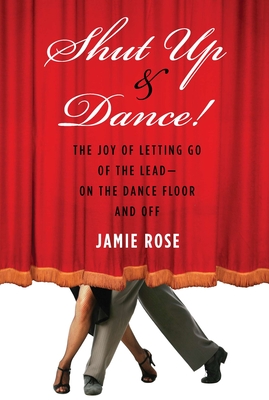 Shut Up and Dance!

At forty-five, Jamie Rose was an independent, take-charge woman whose career as an actress was going nicely, with frequent roles on hit television shows and in films. Yet there was one area of her life that wasn't working: her love life. She'd been living with her boyfriend for five years, and although she was ready to get married, he wasn't. His reason? They fought too much-and unfortunately, he was right. But something magical happened when she signed up for tango lessons: She began to appreciate the power of being a partner in a dance for two-and that letting someone else take the lead from time to time wasn't giving up, but rather, letting go. In this funny and wise book, Rose shares with readers the life lessons she's learned from tango and the other great partner dance traditions.

Dance changed Rose's life, and she discovered that she wasn't the only one. Over and over, the women she encountered at dance halls-women from age twenty to ninety-three-told her how falling in love with dance helped them fall in love with life again. The secret? Whereas before they may have worried that if they let go of their grip on things for a moment, everything would fall apart, now they knew that sometimes letting go of the lead was the best way to keep things together-especially in a relationship.

For anyone who has ever marveled at Fred and Ginger up on the silver screen (how could they be so in sync?), Shut Up & Dance shows readers how to dance their way into a happier, sexier life-even if they never step onto a dance floor.


Praise For Shut Up and Dance!: The Joy of Letting Go of the Lead-On the Dance Floor and Off…

"Rose is gifted with a sharp and humorous pen...[a] charming debut." — Kirkus Reviews

"A smart, funny meditation on dance, love, and one woman's path to happiness. Jamie Rose leads, inspires, and entertains --but like any good dancer, she makes it all look easy. I'm reminded of the line from When Harry Met Sally, 'I'll have what she's having.' In fact, I'm off to find my tango shoes right now!"---Christina Haag, actress and <I>New York Times</I> bestselling author  of <I>Come to the Edge</I>

"There's something so wonderful about dancing with a great leader . . . I think of myself as a strong, forward-thinking woman, but every so often it is really nice to feel taken care of."--Samantha Harris, co-host <I>Dancing with the Stars</I> (seasons 2-9),  correspondent and fill-in anchor Entertainment Tonight

"In her delicious new memoir, Shut Up & Dance! Jamie Rose turns feminism on its head by relating how she became stronger and more secure by yielding, first on the dance floor and then in real life. Like the tango, the advice in this book is simple, elegant, brilliant, and very sexy." — Martha Frankel, author of Hats & Eyeglasses: A Memoir

"A compulsively readable, refreshingly helpful book about how to get out of a relationship rut. Readers can start putting Rose's suggestions into practice before they even reach the final page."-Hope Edelman, <I>New York Times</I> bestselling author of <I>The  Possibility of Everything, Motherless Daughters</I>

Jamie Rose has been a professional actor for more than thirty- five years. Probably best known for her regular role as Vickie Gioberti in the 1980s prime-time hit Falcon Crest, most recently she has had lead roles in multiple films and numerous television shows, including ER, NYPD Blue, House, and Two and a Half Men. She owns her own acting studio, JRose Studio, and has taught Dramatic Literature and Theater Arts courses for California State University, Northridge. An avid social dancer, Rose is passionate about the Argentine tango, and particularly passionate about tango shoes. She also enjoys West Coast swing, Lindy, salsa, Texas two-step, and basically anything that includes great music and sweating. She has been in love with the same man for more than thirteen years, and has been married to him for the past five, she lives in Los Angeles with him, their cat, Fenway, and approximately twenty-five pairs of tango shoes.
Loading...
or
Not Currently Available for Direct Purchase