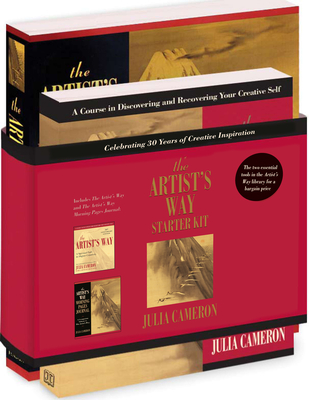 The Artist's Way Starter Kit includes Cameron's two most important Artist's Way tools-The Artist's Way and The Artist's Way Morning Pages Journal-bound together for a bargain price. This attractive package-shrink-wrapped and with a bellyband-will inspire anyone contemplating beginning the Artist's Way program to plunge right into this life-changing twelve-week program!

The Artist’s Way is the seminal book on the subject of creativity. An international bestseller, millions of readers have found it to be an invaluable guide to living the artist’s life. Still as vital today—or perhaps even more so—than it was when it was first published one decade ago, it is a powerfully provocative and inspiring work. In a new introduction to the book, Julia Cameron reflects upon the impact of The Artist’s Way and describes the work she has done during the last decade and the new insights into the creative process that she has gained. Updated and expanded, this anniversary edition reframes The Artist’s Way for a new century.Julia Cameron keeps row after row of journals on the wooden bookcase in her writing room, all containing Morning Pages from more than twelve years of her life. The journals, she says, listen to her. They have been company on travels, and she is indebted to them for consolation, advice, humor, sanity. Now the bestselling author of The Artist's Way offers readers the same companion, in which we may discover ourselves, our fears and aspirations, and our life's daily flow. Readers will find privacy, a portable writing room, where our opinions are for our own eyes. The Artist's Way Morning Pages Journal prioritize the day, providing clarity and comfort. With an introduction and instructions on how to use this journal, by Julia Cameron, readers will uncover the history of their spirits as they move their hands across the universe of their lives.

“For those seeking the wellspring of creativity, this book, like its predecessor, is a solid gold diving rod.”
--PUBLISHERS WEEKLY