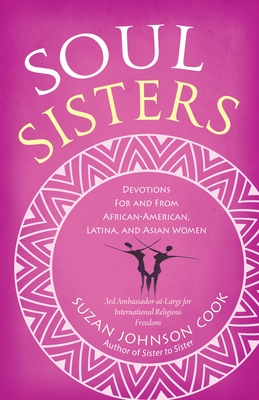 Devotions for and from African American, Latina, and Asian Women

The challenges women face in modern society--raising a family, finding and keeping a steady job in a tough economic climate, and powering through everyday struggles--can feel insurmountable without a solid support system. SOUL SISTERS is one of the many ways in which Ambassador Suzan Johnson Cook hopes to reach women in need of such a system.

This book, from one of the world's leading experts in equality and former Ambassador-at-Large for International Religious Freedom, includes inspirational stories from women of all backgrounds who have overcome life's obstacles and become even stronger because of their struggles.

Ambassador Suzan Johnson Cook is the 3rd Ambassador at Large for International Religious Freedom for the United States of America. Nominated by Secretary of State Hillary Rodham Clinton and appointed by President Barack Obama, she served from April 2011 to October 2013, integrating Religious Freedom into our Foreign Policy and National Security Priorities and representing our nation in more than 25 countries and at more than 100 Diplomatic engagements. Prior to joining the Department of State, Ambassador Johnson Cook was an author, activist, analyst, commentator, educator, entrepreneur, faith leader, professional speaker and a White House Fellow under President Bill Clinton. She invites you to connect with her at ProVoiceMovement@gmail.com and CharismaSpeakers@gmail.com, follow her on Twitter, YouTube and Facebook at AmbassadorSujay, or tune in and subscribe to “Conversations with Ambassador Sujay” on her YouTube channel: AmbassadorSujay.
Loading...
or
Not Currently Available for Direct Purchase