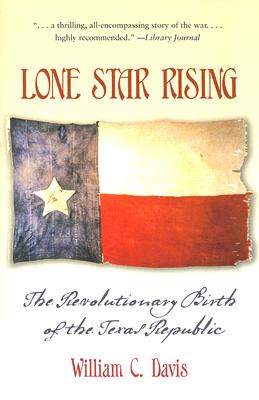 The Revolutionary Birth of the Texas Republic

In the whirlwind of revolutions in the Americas, the Texas Revolution stands at the confluence of northern and southern traditions. On the battlefield and in the political aftermath, settlers from the United States struggled with those who brought revolutionary ideas from Latin America and arms from Mexico. In the midst of the conflict stood the Tejanos who had made Texas home for generations.

This masterpiece of narrative and analysis, first published in hardback in 2004, brings the latest scholarship to bear on the oldest questions. Well-known characters such as Sam Houston, Stephen F. Austin, and General Santa Anna—and the cultures they represented—are etched in sharp and very human relief as they carve out the republic whose Lone Star rose in 1836 and changed the course of a continent.

William C. Davis is the author of more than forty books, including Three Roads to the Alamo. He serves as professor of history and director of programs for the Virginia Center for Civil War Studies at Virginia Tech.
Loading...
or
Not Currently Available for Direct Purchase