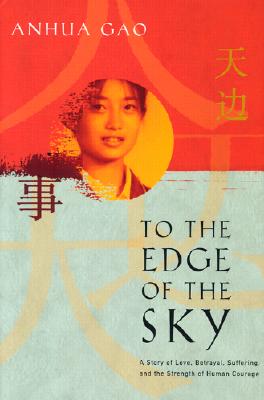 To the Edge of the Sky (Hardcover)

A Story of Love, Betrayal, Suffering, and the Strength of Human Courage

To the "Edge of the Sky" is the harrowing account of a remarkable woman's life in communist China-a tale of human courage in the face of shocking inhumanity and hardship. Anhua Gao (her name means Tranquil Flower) was born in 1949, the year that Mao Tse Tung declared the foundation of the People's Republic of China. "To The Edge of the Sky" is, like Jung Chang's "Wild Swans," an inspiring and heartrending story of life under communist rule and, at the same time, a compelling and detailed history of China's political upheaval through the twentieth century.
Gao's early childhood is idyllic-both of her parents are highly respected workers in the Communist army and the family lives in comfort, with many privileges. By the time Anhua is eleven, however, both are dead-and their reputation proves a fragile shield from the horrors of communist China. With an assured and deliberate voice, and from the perspective of her new and hard-won safety of a new life in Britain (her mother once pointed out the island country to her on a Chinese world map, located on the far left "on the edge of the sky"), Gao interweaves a picture of calamitous Maoist policies with her own story of shocking family betrayal, cruel imprisonment, and bureaucratic absurdity. "To the Edge of the Sky" is a powerful and evocative autobiography-the story of a woman who, against unbelievable odds, survived to find a happiness she had not dared hope for.
or
Not Currently Available for Direct Purchase
Copyright © 2020 American Booksellers Association