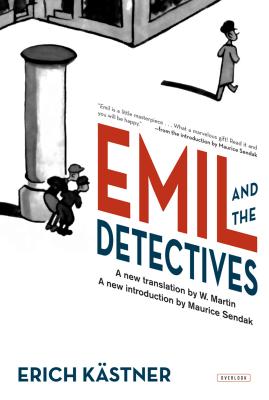 Emil and the Detectives

On the train, his fellow passengers are impressed with how polite and grown-up Emil is, and the man in the bowler hat offers him some chocolate—but Emil keeps checking his coat pocket, where he’s pinned the money that he is taking to his grandmother. Soon, though, Emil finds himself getting sleepy . . . and the next thing he knows, the man in the bowler hat is gone— and so is the money! With the help of some new friends Emil becomes a detective and tracks the thief through the city. Filled with enduring themes of leadership, courage, and teamwork, and the delightful illustrations of Walter Trier, Emil and the Detectives is a rollicking, heartwarming tale come alive.

Erich Kastner (1899-1974) was one of the best-known international children s authors of the twentieth century, as well as a poet, screenwriter and satirist. He was awarded the American Library Association Mildred L. Batchelder Award and the Hans Christian Andersen Award. Walter Trier (1890-1951) was a celebrated children s book illustrator. Maurice Bernard Sendak (1928 2012) was an internationally renowned American illustrator and writer of children s books, best known for "Where the Wild Things Are." He was the recipient of a Hans Christian Andersen Award for Illustration, a Caldecott Medal, a National Book Award, and a National Medal of Arts."
Loading...
or
Not Currently Available for Direct Purchase