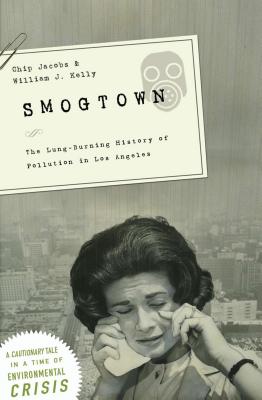 The Lung-Burning History of Pollution in Los Angeles

The smog beast wafted into downtown Los Angeles on July 26, 1943. Nobody knew what it was. Secretaries rubbed their eyes. Traffic cops seemed to disappear in the mysterious haze. Were Japanese saboteurs responsible? A reckless factory? The truth was much worse--it came from within, from Southern California's burgeoning car-addicted, suburban lifestyle. Smogtown is the story of pollution, progress, and how an optimistic people confronted the epic struggle against airborne poisons barraging their hometowns. With wit, verve, and a fresh look at history, California based journalists Chip Jacobs and William J. Kelly highlight the bold personalities involved, the corporate- tainted science, the terrifying health costs, the attempts at cleanup, and how the smog battle helped mold the modern-day culture of Los Angeles. There are scofflaws aplenty and dirty deals, plus murders, suicides, spiritual despair, and an ever-present paranoia about mass disaster. Brimming with historic photographs, forgotten anecdotes, and new revelations about our environmentally precarious present, Smogtown is a journalistic classic for the modern age.

Chip Jacobs is the co-author of The People's Republic of Chemicals and author of The Vicodin Thieves, The Ascension of Jerry, and Wheeler-Dealer. Jacobs’ reporting has appeared in the Los Angeles Times, The New York Times, CNN, Bloomberg View, the Daily News of Los Angeles, L.A. Weekly and newgeography.com, among other outlets. Jacobs, the recipient of numerous writing commendations, lives in Southern California. Visit chipjacobs.com to learn more.

<strong>William J. Kelly</strong> is the co-author The People's Republic of Chemicals and author of Home Safe Home. His reporting has appeared in the Los Angeles Times, Consumers Digest, Inside Climate News, L.A. Weekly, and the California Journal, among other outlets. He was chief spokesman for South Coast Air Quality Management District, the smog control agency for greater Los Angeles, and is currently the senior correspondent for the California Current. Kelly, the recipient of numerous writing awards, lives in the Los Angeles area.
or
Not Currently Available for Direct Purchase
Copyright © 2020 American Booksellers Association