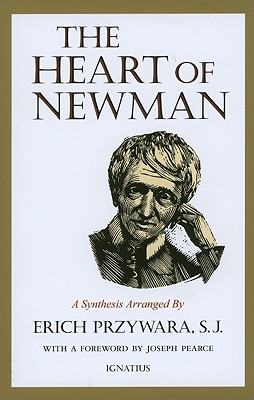 The Heart of Newman (Paperback)

This new edition of a classic anthology of the writings and sermons of the great John Henry Newman is a rare treasure house of Newman’s thought and inspiration. Released to coincide with the Beatification of Newman by Pope Benedict XVI in Newman’s homeland, England, where Newman’s spiritual influence on his own contemporaries was immense, this collection shows the timeless wisdom of Newman and how strong an appeal his writings have for the modern Christian.

In his sermons, often praised for their freshness and originality, Newman had a style of relating the plain truths of the Gospel in a realistic and empathic way. He saw the great importance of the individual differences in human souls, and a unique feature of his approach was always to speak to people as individuals.

In this outstanding anthology, Fr. Erich Przywara, S.J., organizes Newman’s thought systematically and in its completeness. He divides the writings and sermons into twenty-one categories by such themes as God, Miracles, Faith, Scripture, the Church, Body of Christ, Eternal Life, etc., drawn from 25 works by or about Newman.

Unlike some spiritual books, which were written in foreign languages, Newman's works were originally written in modern English. His style is very familiar and readable. This volume is an excellent combination of Newman’s insights on spirituality, prayer, doctrine, philosophy, and it probes into the nature of God and his Church.

Joseph Pearce, director of the Aquinas Center for Faith and Culture at Aquinas College in Nashville, is the author of three books on Shakespeare, all published by Ignatius Press, and is the editor of the Ignatius Critical Editions of Romeo and Juliet, The Merchant of Venice, Julius Caesar, Hamlet, King Lear, and Macbeth. He is editor of the St. Austin Review (or StAR), a magazine of Christian culture and tradition published by St. Augustine’s Press.