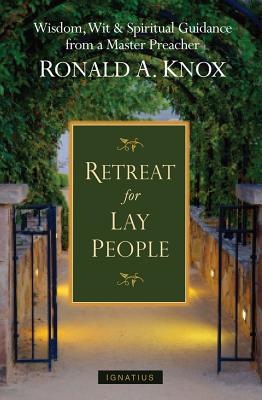 A Retreat for Lay People

C.S. Lewis called him the wittiest man in Europe, and Ronald Knox was a deft apologist, an astute translator of the Bible, and the preacher for occasions great and small throughout the first half of the twentieth century in England. But he was first and last a priest, and it is in his sermons and retreat conferences that we meet Ronald Knox the spiritual guide. A Retreat for Lay People brings together a collection of his conferences preached over a period of fifteen years. His opening topic is Discouragement in Retreat, and he concludes with a reflection on Our Lady's Serenity. In between, Knox addresses the big questions - the fear of death, the problem of suffering, the world to come - but he also explores the little questions that loom large in our daily lives, like minor trials, liberty of spirit in prayer, and the use of God's creatures. Msgr. Knox shapes his collection around the classic Spiritual Exercises of St. Ignatius. The first eight conferences address the foundations of our spiritual life; the next eight offer reflections on the life of Our Lord; the final eight take up practical questions of living our faith in daily life. These pieces of eight are punctuated by two meditations suitable for a Holy Hour. The Eucharist was at the heart of Knox's life and his profound love for Christ in the Blessed Sacrament shines through in these talks. As in all his writing, in these conferences Ronald Knox combines love for Scripture, commitment to the Catholic faith, and sympathy for the struggles and joys of Christian discipleship. A Retreat for Lay People is solid spiritual food, served up with refreshing simplicity and a dash of wit.

Throughout the first half of the 20th century, both as an Anglican and as a Roman Catholic, Ronald Knox was a well-known part of the English literary landscape. He was a favored preacher for occasions great and small; his articles on a host of topics found a place in the newspapers and monthly literary magazines; his voice was heard often on the BBC. He wrote numerous popular spiritual and literary works including The Belief of Catholics, Captive Flames, The Hidden Stream and Pastoral and Occasional Sermons.
Loading...
or
Not Currently Available for Direct Purchase