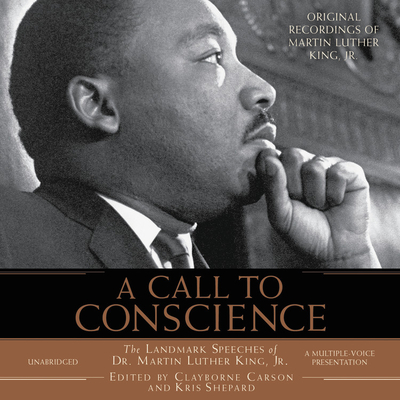 A Call to Conscience

A powerful collection of the most essential speeches from famed social activist and key civil rights figure Dr. Martin Luther King, Jr.
This companion volume to A Knock At Midnight: Inspiration from the Great Sermons of Rev. Martin Luther King, Jr. includes the text of his most well-known oration, "I Have a Dream", his acceptance speech for the Nobel Peace Prize, and Beyond Vietnam, a powerful plea to end the ongoing conflict. Includes contributions from Rosa Parks, Aretha Franklin, the Dalai Lama, and many others.

Martin Luther King, Jr. (January 15, 1929 - April 4, 1968) was a famous leader of the American civil rights movement, a political activist, and a Baptist minister. In 1964, King became the youngest man to be awarded the Nobel Peace Prize for his work as a peacemaker, promoting nonviolence and equal treatment for different races. On April 4, 1968, Dr. King was assassinated in Memphis, Tennessee. In 1977, he was posthumously awarded the Presidential Medal of Freedom by Jimmy Carter. In 1986, Martin Luther King Day was established as a United States holiday. Dr. King often called for personal responsibility in fostering world peace. King's most influential and well-known public address is the "I Have A Dream" speech, delivered on the steps of the Lincoln Memorial in Washington, D.C.
Loading...
or
Not Currently Available for Direct Purchase