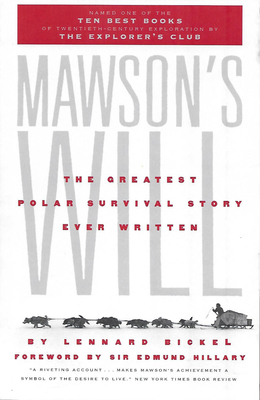 The dramatic story of explorer Douglas Mawson and "the most outstanding solo journey ever recorded in Antarctic history" (Sir Edmund Hillary, mountaineer and explorer)

For weeks in Antarctica, Douglas Mawson faced some of the most daunting conditions ever known to man: blistering wind, snow, and cold; the loss of his companion, dogs, supplies, and even the skin on his hands and feet. But despite constant thirst, starvation, disease, and snow blindness—he survived.

Sir Douglas Mawson is remembered as the young Australian who would not go to the South Pole with Robert Scott in 1911. Instead, he chose to lead his own expedition on the less glamorous mission of charting nearly 1,500 miles of Antarctic coastline and claiming its resources for the British Crown. His party of three set out through the mountains across glaciers in 60-mile-per-hour winds. Six weeks and 320 miles out, one man fell into a crevasse—along with the tent, most of the equipment, the dogs' food, and all except a week's supply of the men's provisions.

Mawson's Will is the unforgettable story of one man's ingenious practicality, unbreakable spirit, and how he continued his meticulous scientific observations even in the face of death. When the expedition was over, Mawson had added more territory to the Antarctic map than anyone else of his time. Thanks to Bickel's moving account, Mawson can be remembered for the vision and dedication that make him one of the world's great explorers.

Praise For Mawson's Will: The Greatest Polar Survival Story Ever Written…

"The most outstanding solo journey ever recorded in Antarctic history." -- Sir Edmund Hillary

"A riveting account . . . makes Mawson's achievement a symbol of the desire to live." -- The New York Times Book Review

"Both grim and inspiring reading." -- The Wall Street Journal

Australian author Lennard Bickel reconstructed Mawson's journey from the diaries of Mawson and other members of his expedition. He is the author of seven books, including Shackleton's Forgotten Men.
Loading...
or support indie stores by buying on