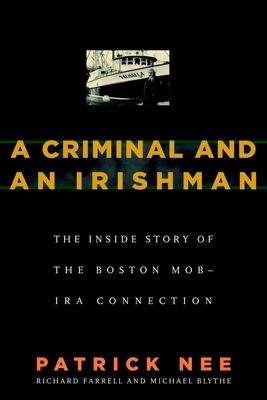 A Criminal and An Irishman (Paperback)

The Inside Story of the Boston Mob - IRA Connection

After serving in Vietnam as a combat Marine, Irishman Pat Nee returned to the gang-filled streets of Boston. A member of the Mullen Gang since the age of 14, Nee rejoined the group to lead their fight against Whitey Bulger’s Killeen brothers. Years later, the two gangs merged to form the Winter Hill Gang, at first led by Howie Winter and then by Bulger. But by the time Bulger took over, a wide rift had opened up between the infamous crime boss and Pat Nee, who was disgusted by Bulger's brutality.

A Criminal and an Irishman is the story of Pat Nee’s life as an Irish immigrant and Southie son, a Marine and convicted IRA gun smuggler, and a former rival-turned-associate of James "Whitey" Bulger. His narrative transports readers into the criminal underworld, taking them inside preparation for armored car heists, gang wangs, and revenge killings. Nee details his evolution from tough street kid to armed robber to dangerous potential killer, disclosing for the first time how he used his underworld connections as a secret operative for the Irish Republican Army. For years, Pat smuggled weapons and money from the United States to Ireland—in the bottoms of coffins, behind false panels of vans—leading up to a transatlantic shipment of seven and a half tons of munitions aboard the fishing trawler Valhalla. No other Southie underworld figure can match Pat’s reputation for resolve and authenticity.

At fourteen Patrick Nee became associated with the gang that would later battle Whitey Bulger for rights to Southie’s criminal activities. A Marine veteran of Vietnam, Pat helped the Irish Republican Army smuggle money, guns, and munitions out of the United States. He served nearly two years in prison for the Valhalla smuggling operation, received early parole, then promptly attempted to rob an armored car in order to raise funds for the IRA. He served nine years for this later conviction, and today he works as a day laborer and spends time with his two daughters and grandchildren. He lives in South Boston.

Richard Farrell won the du Pont—Columbia Award for Excellence in Broadcast Journalism for his film High on Crack Street. He covered the war in Bosnia, has directed several award-winning films, and has written articles for the Boston Globe and numerous other publications. He lives in southern New Hampshire.


Praise For A Criminal and An Irishman: The Inside Story of the Boston Mob - IRA Connection…

"A profane, often brutal memoir . . . Nee maintained an uneasy alliance with [Whitey] Bulger while persuing his personal cause -- raising money and smuggling weapons for the Irish Republican Army." — The Boston Herald

"Nee commits some horrible crimes, from attempted murder to armed robbery. Yet even as he chases someone with a rifle through South Boston, he's the sort of guy you want to root for." — The Lawrence Eagle-Tribune
or
Not Currently Available for Direct Purchase
Copyright © 2020 American Booksellers Association