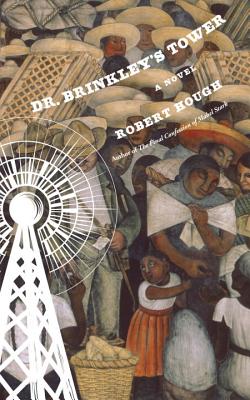 “The people of the tiny Mexican border town of Corazon de la Fuente have lived through a long, bloody revolution and have lost many loved ones. With the building of Dr. Brinkley's radio tower, they feel they have a chance at reviving their village and bringing prosperity and happiness to their lives. On the eve of the mayor handing Dr. Brinkley the key to their fair city, the village healer shouts, 'Stop! Can't you see the man is a liar, a peddler of myths and false hope?' Brinkley was an American con artist and the inspiration for this novel, but the focus of Hough's insightful and penetrating tale is the people of Corazon and how their lives are irrevocably changed. Highly recommended!”
— Karen Briggs, Great Northern Books and Hobbies, Oscoda, MI
View the List

A riotous tale of love and lust, valor and villainy on the Mexican frontier of the 1930s.

Robert Hough’s vivid and wildly imaginative novel takes us to 1931 Mexico and Corazón de la Fuente, a war-ravaged border town where the only enterprise is a brothel in which every girl is called Maria. Enter, from north of the border, Dr. Romulus Brinkley, inventor of a miraculous “goat gland operation” said to cure sexual impotence. When Brinkley decides to build a gargantuan new radio tower to broadcast his services throughout the United States, he chooses none other than Corazón de la Fuente for its site.

The town’s fortunes change overnight, but not all to the good – word of the new prosperity spreads, and Corazón is overrun with desperadoes and mercenaries itching to reopen old wounds. Worst of all, Dr. Brinkley has attracted the affections of the town’s most beautiful citizen, Violeta Cruz. But with the help of a motley band of allies, Violeta’s spurned fiancé, Francisco, decides to fight back.

Inspired by the monstrous shenanigans of a real life American con man and peopled with unforgettable characters, Dr. Brinkley’s Tower captures a young Mexico caught between its own ambitions and the designs of its wealthier neighbor to the north.

"A wildly imaginative historical novel set in the Mexican border town of Corazon de la Fuente, with a nod to the shenanigans of a true-life con artist." – O Magazine

"Dr. John Romulus Brinkley, the inspiration for this folksy, ingratiating novel, was a real person, although his life was tailor-made for fiction. . . . Hough's tone recalls Mark Twain in tall-tale mode, but the story is also shot through with threats and portents. . . . In its own smart, seriocomic way, Hough's novel preaches the virtues of refusing to get screwed again." – The Washington Post

“The prosperity an American doctor’s broadcasting service promises to bring a Mexican brothel town instead produces disaster in Dr. Brinkley’s Tower . . . There’s a dignity to the people in the town, despite their poverty, so readers care desperately when the tower brings its changes. We come to inhabit the town, walking its avenues and smelling the cooking . . . Fans of Gabriel García Márquez will recognize a touch of his lyricism, but this book is firmly grounded in reality. At the core of the richly interwoven stories is the search for the difference between false promise and real worth. Memorable historical fiction.” – Booklist


"Hough take(s) all of these characters beyond stereotypes and invest(s) them with humanity and humor. . . . Hough slyly presents a cast of characters largely taken in by their own folly and gullibility." -- Kirkus Reviews

"Hilarious and penetrating . . . Hough is a master storyteller." -- Globe and Mail

"Dr. Brinkley’s Tower moves like an extremely well-oiled machine, juggling and nudging forward all kinds of subplots without ever drawing attention to the muscularity required to do so." --  National Post

"A tapestry-rich, almost magical narrative with dozens of fully realized characters and a vividly detailed world ... [Dr. Brinkley's Tower] is a thing of wonder." -- Edmonton Journal

"With ingenious characters and striking scenes, Hough reveals a love of Mexican culture and has crafted a story that convincingly illustrates the emotions of men and women."  -- FFWD

Robert Hough is one of Canada’s most critically acclaimed writers and has been published to rave reviews in fifteen countries. His debut novel, The Final Confession of Mabel Stark, was shortlisted for the Commonwealth Writers' Prize and was a New York Public Library Best Book. His second novel, The Stowaway, was a finalist for the IMPAC Dublin Award and chosen by the Boston Globe as one of the top ten fiction titles of the year. His most recent novel, The Culprits, was a finalist for the Trillium Book Prize, the Commonwealth Writers’ Prize, and the Rogers Writers' Trust Fiction Prize. He lives in Toronto.

More information about Dr. Brinkley’s Tower and Robert Hough can be found at www.roberthough.ca