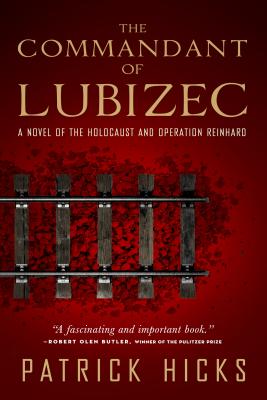 A Novel of The Holocaust and Operation Reinhard

After the Nazis invaded Poland in 1939, they quickly began persecuting anyone who was Jewish. Millions were shoved into ghettos and forced to live under the swastika. Death camps were built and something called "Operation Reinhard" was set into motion. Its goal? To murder all the Jews of Poland.

The Commandant of Lubizec is a harrowing account of a death camp that never actually existed but easily could have in the Nazi state. It is a sensitive, accurate retelling of a place that went about the business of genocide. Told as a historical account in a documentary style, it explores the atmosphere of a death camp. It describes what it was like to watch the trains roll in, and it probes into the mind of its commandant, Hans-Peter Guth. How could he murder thousands of people each day and then go home to laugh with his children? This is not only an unflinching portrayal of the machinery of the gas chambers, it is also the story of how prisoners burned the camp to the ground and fled into the woods. It is a story of rebellion and survival. It is a story of life amid death.

With a strong eye towards the history of the Holocaust, The Commandant of Lubizec compels us to look at these extermination centers anew. It disquiets us with the knowledge that similar events actually took place in camps like Bełzec, Sobibór, and Treblinka. The history of Lubizec, although a work of fiction, is a chillingly blunt distillation of real life events. It asks that we look again at "Operation Reinhard". It brings voice to the silenced. It demands that we bear witness.

Praise For The Commandant of Lubizec: A Novel of The Holocaust and Operation Reinhard…

"A heart-rending novel about a Nazi death camp that didn't exist—but could have. Hicks. . . tells the story of the fictional Lubizec as if it were a historical account, complete with footnotes and quotes from future fictional documentaries, to devastating effect. . . . Hicks' prose is clear and unflinching, and while, as a result, there are many difficult-to-read scenes, this is as it should be. . . .Thought-provoking and gut-wrenchingly powerful." — Kirkus Reviews

"The fictional presentation here measures up to any factual account of the Holocaust this reviewer has ever read. Highly recommended, especially for general readers who wish to know more about this unspeakable chapter of human history. Even specialists will be taken in by its human-interest dimension."  — Library Journal

"Hicks injects his prose with the first person plural, which inexorably absorbs us into the story to act as another pair of shoulders bearing the knee-buckling weight of remembering the dead." — War, Literature, and the Arts: An International Journal of the Humanities

"This is a bruising novel, a compelling book that will stun readers while leaving a lingering emotional ache. Even those familiar with the vast body of Holocaust literature will find much here that is new, revealing, moving—and deeply disturbing. . . It is Hicks' use of language that powers this book. . . In a few deft strokes of character development and carefully chosen language Hicks makes us feel empathy for both the doomed and the few survivors." — Jaime Sullivan, Paddlefish

"This is a vividly detailed, terrifying, convincing, and completely spellbinding story rooted in those murderous events we now call the Holocaust.  It is also the story of a loving, good-humored family man who each morning goes off to oversee mass homicide -- a dramatic example of what Hannah Arendt once referred to as 'the banality of evil.'  Patrick Hicks has accomplished a very difficult literary task.  He has a given a believable and fresh and original face to barbarism.  What a fine book this is." — Tim O'Brien, author of The Things They Carried

"In a powerful blend of research and imagination, Patrick Hicks ushers us through the history of a prototypical death camp during the Holocaust. This novel mourns the millions who were silenced, while reminding us how ordinary and matter-of-fact the face of evil can be. The Commandant of Lubizec is a painfully necessary book." — Clint McCown, author of War Memorials and Haints; winner of the American Fiction Prize

"In The Commandant of Lubizec, Patrick Hicks imagines the unimaginable and thus gives us a glimpse into the terrible complexity of the human heart. This is a fascinating and important book." — Robert Olen Butler, Pulitzer Prize winner, author of Good Scent from a Strange Mountain, They Whisper, and A Small Hotel

"The Commandant of Lubizec melds the historian’s factual precision with a storyteller’s compassion and love for humanity. This is fiction at its highest register -- creating inroads into the past so that we might hear those murdered in the extermination camps of the Holocaust, so that we might better recognize the world we have inherited. Profound and trenchant, The Commandant of Lubizec is a brave and unflinching book. It is a stunning literary debut. I urge you to read it before it’s made into a film."  — Brian Turner, author of Here, Bullet and Phantom Noise

"In The Commandant of Lubizec, Patrick Hicks may have invented a brand new genre, the fictional documentary. This novel seems so convincingly based in evidence that any reader unsure of the names of the Nazi death camps is likely to read it as non-fiction—which is part of Hicks’ deep intent. He reveals to us how quickly we lose track of history and how troubling that loss is. In writing a novel about those who survived a fictional death camp, he mysteriously makes us feel and understand the millions of deaths in the real ones. Through his playful art, he makes us feel and understand the horror of the Holocaust in ways most non-fiction simply cannot. It’s a remarkable and elegant artistic achievement. This is a novel I deeply admire." — Kent Meyers, author of The Work of Wolves and Twisted Tree

"[Hicks] is an extremely gifted crafter of words, one who is more than capable of making us understand the importance of a single life of a man staring at an incomprehensible, unjust death in the face. . . If such events make us want to turn away, it is the power of Hicks' novel to rally us to stand with those we can only imagine, opening our eyes to a wider universe of those shared, small moments we ignore at our own peril." — The Briar Cliff Review

Patrick Hicks is the author of several poetry collections, most recently Finding the Gossamer and This London. His work has appeared in some of the most vital literary journals in America, including Ploughshares, Glimmer Train, The Missouri Review, and many others. He has been nominated seven times for the Pushcart Prize, been a finalist for the High Plains Book Award, the Dzanc Books Short Story Collection Competition, and the Gival Press Novel Award. He has won the Glimmer Train Fiction Award as well as a number of grants, including ones from the Bush Artist Foundation and the National Endowment for the Humanities. After living in Europe for many years, he now lives in the Midwest where he is the Writer-in-Residence at Augustana College and also a faculty member in the low-residency MFA Program at Sierra Nevada College. The author lives in Sioux Falls, SD.

1. Although Lubizec didn’t exist, were there times when you thought that it did?

2. When did this happen?

3. What were your feelings about Hans-Peter Guth? How could he murder thousands of people a day and then go home to love his children? Is this believable?

4. Throughout the narrative, Hicks often blends fact and fiction. Why did he use footnotes that refer to real historical documents? What effect did this have?

5. What did you think of the relationship between Guth and his wife, Jasmine? How did living so close to a factory of death influence their marriage?

6. Hicks often interrupts the action to offer comments from Zischer and Damiel— these comments are all taken from fictitious interviews recorded years after Lubizec was destroyed. What interruptions were the most powerful for you? What did you think of the chapter called “Evidence”?

7. When Erich Bolender, an SS Judge, shows up at Lubizec to investigate criminal activity in the warehouses of Zurich, were you surprised by his reaction? Is it likely that a high-ranking Nazi officer would be startled by the reality of a death camp when he sees one for the first time?

8. After the escape, why was the camp plowed into the ground? Why were the real life “Operation Reinhard” camps destroyed in 1943?

9. How did having Guth as a father influence Sigi and Karl as adults? Which one of them has come to terms with their father the best? What would it mean to have a father like Guth? How would you react?

10. Did Guth ever acknowledge the scope of his crime? If yes, when did this happen? If no, what does this mean and why doesn’t he admit his guilt?

11. Hardly any of the guards at Lubizec were put on trial after the war. In fact, Guth lives a comfortable life in Barcelona for many years. Why was justice so lax?

12. Chaim Zischer and Dov Damiel are haunted by what they saw at Lubizec. How do they cope with their memories? Who suffered more after the war: The victims or the perpetrators?

13. History itself is a story. What is Hicks saying about memory and documentation and how we remember the past? What will happen to our understanding of the Holocaust when our last living eyewitness passes away?

14. The final scene in the novel takes place at Lubizec and we see what the camp looks like today. The novel closes with Zischer standing before the gas chamber site. How do we commemorate genocide? What have we learned from the Holocaust? What are you likely to take away from this book?