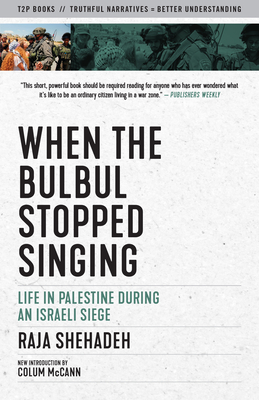 When the Bulbul Stopped Singing (Paperback)

Life in Palestine During an Israeli Siege (Eyewitness Memoirs)

The Israeli army invaded Ramallah in March 2002. A tank stood at the end of Raja Shehadeh’s road; Israeli soldiers patrolled from the rooftops. Four soldiers took over his brother’s apartment and then used him as a human shield as they went through the building, while his wife tried to keep her composure for the sake of their frightened children, ages four and six. This book is an account of what it is like to be under siege: the terror, the frustrations, the humiliations, and the rage of civilians becoming trapped in their own homes and at the mercy of young soldiers who have been ordered to set aside their own sense of human decency in order to bully, harass and in some cases brutalize an unarmed population. How do you pass your time when you are imprisoned in your own home? What do you do when you cannot cross the neighborhood to help your sick mother? And what does it feel like when occupier and occupied, who are supposed to be enemies, are forced to set aside feelings of empathy? When the Bulbul Stopped Singing reveals universal and timeless truths. A new introduction by Colum McCann and an afterword by the author show how little things have changed since this record of life under siege was first compiled.

RAJA SHEHADEH is a Palestinian lawyer and writer who lives in Ramallah. He is a founder of Al-Haq, a pioneering, nonpartisan human rights organization, and the author of several books, including Strangers in the House and Palestinian Walks.

INTRODUCTION WRITER COLUM MCCANN is the internationally bestselling author of such novels as TransAtlantic and National Book Award winner Let the Great World Spin. His fiction has been published in more than 40 languages. His other honors include the International IMPAC Dublin Literary Award and in 2017 he was elected to the American Academy of Arts. A contributor to The New Yorker, The New York Times Magazine, The Atlantic, and The Paris Review, he teaches in the Hunter College MFA Creative Writing program. He lives in New York City with his wife and their three children, and he is the cofounder of the global nonprofit story exchange organization, Narrative 4.

Praise For When the Bulbul Stopped Singing: Life in Palestine During an Israeli Siege (Eyewitness Memoirs)…

"This short, powerful book should be required reading for anyone who has ever wondered what it's like to be an ordinary citizen living in a war zone." — Publishers Weekly

"Shehadeh's voice is a rare one... angry yet dispassionate, comitted yet free." -- Michael Ignatieff

"Shehadeh captures the rage and despair of lives stunted by occupation." -- Washington Post


"An intimate view of living under curfew, listening to gunfire and explosions, detouring around troops and roadblocks, and having one's home searched or damaged. . . . Shehadeh is indignantly critical of Israel and does not much praise Palestinian leadership. Tragically jammed between the two are the aspirations and humiliations of nonmilitant Palestinians, which the author ably expresses." — Booklist
or support indie stores by buying on
Copyright © 2020 American Booksellers Association