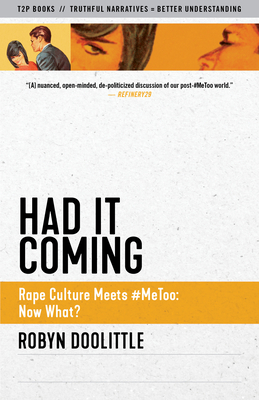 Had It Coming is not a diatribe or manifesto, but an informed look at how attitudes around sexual behavior have changed and still need to change.

"As a culture we aren't very good at having nuanced, complicated discussions," Doolittle writes in her introduction. "The public space is not a safe venue to talk about controversial subjects. Social media has seen to that . . . I've come to embrace the complexities and messiness that comes with those tough conversations."

Doolittle brings a personal voice to what has been a turning point for most women: the #MeToo movement and its aftermath. The world is now increasingly aware of the pervasiveness of rape culture in which powerful men got away with sexual assault and harassment for years, but Doolittle looks beyond specific cases to the big picture. The issue of "consent" figures largely: not only is the public confused about what it means, but an astounding number of legal authorities are too.

Praise For Had it Coming: Rape Culture Meets #MeToo: Now What? (Truth to Power)…

“Doolittle brings journalistic rigor and balance to a heated discussion. Had It Coming is a welcome respite from endless think-pieces about toxic masculinity that do little to change hearts and minds.--The Santa Fe New Mexican

In this "accessible investigation…Doolittle, has raised 'tough questions' about sexual assault: 'When does an action cross the line? What should happen to those who have committed harm? What exactly should the courts be doing differently? How do you reconcile a victim’s right to call out the abuser with an accused person’s right to self-defense and a fair hearing?' . . .  a balanced consideration of a timely issue."
-- Kirkus Reviews

"Doolittle injects herself into the narrative as she interviews experts. The book can be best read as a useful primer on the myths still embedded in how sexual assault is treated within the courts and culture . . ." -- Maclean's

"An in-depth look at how attitudes around sexual harassment and assault are changing in the #MeToo era." -- CBC

"[Doolittle's] analysis of a complex and difficult subject is colorful and prismatic . . . She uses a conversational, approachable tone to make the book relatable to people on both sides of the 'he said, she said' fence." -- Literary Review of Canada

"[A] nuanced, open-minded, de-politicized discussion of our post-#MeToo world." -- Refinery29

"Doolittle writes with lucidity and heart, directly addressing the challenges posed by a book that delves onto a topic that often leads to knee-jerk reactions and polarizing debates. Instead of capitulating to these impulses, she chooses to explore the questions of the moment with the nuance and detail they deserve . . . A must-read for all Canadians." -- Quill & Quire

"Should be mandatory reading in high school health classes to accompany lessons about consent to speed up a much-needed cultural shift in how sexual assault cases are judged. . . . it's an important read that forces readers to question their knee-jerk reactions affiliated with #MeToo--and makes them think twice before typing a tweet." -- The Winnipeg Free Press

“Its style straightforward and investigative, the book’s analysis is accessible, and the facts it delivers stand to force the interrogation of individuals’ blind spots. Had It Coming is an important text about how North American cultures handle sexual assault; it pushes progress toward durable social changes.” --Foreword Reviews

Robyn Doolittle is a Globe and Mail investigative journalist. Her reporting on Mayor Rob Ford for the Toronto Star made headlines around the world, won the Michener Award for public service journalism, and her number-one bestselling book on the topic, Crazy Town: The Rob Ford Story, earned her the Kobo Emerging Writer Prize. Her Unfounded series, which investigated how police services handle sexual assault cases, was one of the most viewed and read stories in the Globe's modern history. She was named Journalist of the Year in 2017 by the Canadian Centre for Journalism.
Loading...
or
Not Currently Available for Direct Purchase