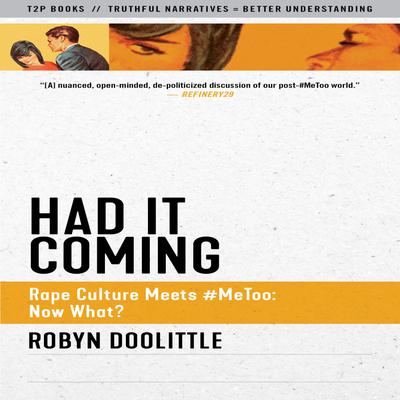 Had it Coming (Digital Audiobook)

Had It Coming is not a diatribe or manifesto, but an informed look at how attitudes around sexual behavior have changed and still need to change.

"As a culture we aren't very good at having nuanced, complicated discussions," Doolittle writes in her introduction. "The public space is not a safe venue to talk about controversial subjects. Social media has seen to that . . . I've come to embrace the complexities and messiness that comes with those tough conversations."

Doolittle brings a personal voice to what has been a turning point for most women: the #MeToo movement and its aftermath. The world is now increasingly aware of the pervasiveness of rape culture in which powerful men got away with sexual assault and harassment for years, but Doolittle looks beyond specific cases to the big picture. The issue of "consent" figures largely: not only is the public confused about what it means, but an astounding number of legal authorities are too.

ROBYN DOOLITTLE is a Globe and Mail investigative journalist. Her Unfounded series, which investigated how police services handle sexual assault cases, was one of the most viewed and read stories in the Globe's modern history. She was named Journalist of the Year in 2017 by the Canadian Centre for Journalism. Prior to that, her reporting on Mayor Rob Ford for the Toronto Star made headlines around the world, won the Michener Award for public service journalism, and her number-one bestselling book on the topic, Crazy Town: The Rob Ford Story, earned her the Kobo Emerging Writer Prize.