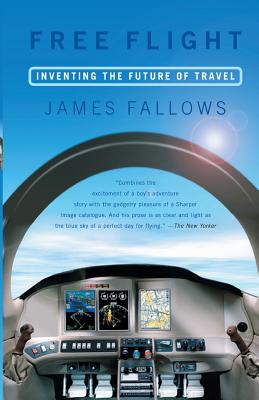 Inventing the Future of Travel

The troubles of the airline system have become acute in the post-terrorist era. As the average cost of a flight has come down in the last twenty years, the airlines have survived by keeping planes full and funneling traffic through a centralized hub-and-spoke routing system. Virtually all of the technological innovation in airplanes in the last thirty years has been devoted to moving passengers more efficiently between major hubs. But what was left out of this equation was the convenience and flexibility of the average traveler. Now, because of heightened security, hours of waiting are tacked onto each trip. As James Fallows vividly explains, a technological revolution is under way that will relieve this problem. Free Flight features the stories of three groups who are inventing and building the future of all air travel: NASA, Cirrus Design in Duluth, Minnesota, and Eclipse Aviation in Albuquerque, New Mexico. These ventures should make it possible for more people to travel the way corporate executives have for years: in small jet planes, from the airport that's closest to their home or office directly to the airport closest to where they really want to go. This will be possible because of a product now missing from the vast array of flying devices: small, radically inexpensive jet planes, as different from airliners as personal computers are from mainframes. And, as Fallows explains in a new preface, a system that avoids the congestion of the overloaded hub system will offer advantages in speed, convenience, and especially security in the new environment of air travel.

James Fallows is National Correspondent for the Atlantic Monthly, and has worked for the magazine for more than twenty years. His previous books include Breaking the News: How the Media Undermine American Democracy, Looking at the Sun, More Like Us, and National Defense. Fallows has been a regular commentator on NPR. He lives in Washington, D.C.
Loading...
or support indie stores by buying on