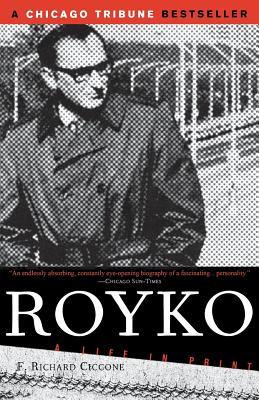 A Life In Print

With the incisive pen of a newspaperman and the compassionate soul of a poet, Mike Royko was a Chicago institution who became, in Jimmy Breslin's words, "the best journalist of his time." Royko was by all accounts a difficult man, who would chew out his assistants every morning and retire to the Billy Goat Tavern every night. But his writing was magic. No one captured Chicago like Mike Royko. No one wrote with his honesty, his toughness, his passion, and his humor.

In this, the first comprehensive biography of one of the most important Chicagoans of the century, Dick Ciccone, a long-time colleague and editor of Royko's at the Chicago Tribune, captures Royko at his best and at his worst. We see Royko on his tenth drink of the afternoon. We see him sweating over columns minutes before deadline. We see him romancing his wife and torturing his legmen. We see him barbequeing ribs and riffing on politicians. Mike Royko was a man of the people. With his keen sense of justice and his murderous pen, he became the most widely read columnist in Chicago history. His column was syndicated in more than 600 newspapers across the country.

With 7500 columns spanning four decades, Royko's writing reflects a radically changing America. Royko not only tells the story of one of America's greatest newspapermen, but also explores the dramatic changes in journalism over the course of the twentieth century.

F. Richard Ciccone is a veteran Chicago newsman who has been a reporter for the Associated Press and political editor and metro editor for the Chicago Tribune. He is the author of Daley: Power and Presidential Politics, and Chicago and the American Century. He lives in Wilmette, Illinois.
Loading...
or support indie stores by buying on