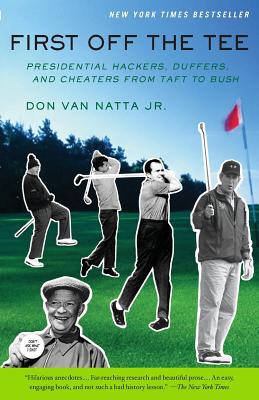 First Off The Tee

Some students of the presidency say that we can learn the most about the men who've occupied the Oval Office by studying their ideology. Others say political savvy or family background or regional influences are paramount. But Don Van Natta argues for another standard -- by observing the way they play golf.

Fourteen of the last seventeen presidents have been golfers, and Van Natta explores two questions: Why is the game of golf so attractive to the men who occupy the Oval Office? And what do their golf games reveal about their characters? Some presidents relied on golf to escape the burdens of office, while others brought those burdens with them. And few have been able to resist the perks of high office, bending the rules and freely taking mulligans. Is it really surprising to learn that the section called "Hail to the Cheats" features the golfing escapades of Bill Clinton, Richard Nixon, Lyndon Johnson, and Warren Harding?

Not content to rely solely on the history books, Van Natta takes the reader on a round of golf he recently played with Bill Clinton and draws on extensive interviews with the golfing ex-presidents about what the game means to them. For history buffs and golf aficionados alike, First Off the Tee is a cheerful romp and a unique way to share the links with America's duffers-in-chief.

Don Van Natta is an investigative correspondent for the New York Times. He has been a member of three Pulitzer Prize-winning teams, and is the author of First off the Tee: Presidential Hackers, Duffers and Cheaters from Taft to Bush and Her Way: The Hopes and Ambitions of Hillary Rodham Clinton.
Loading...
or
Not Currently Available for Direct Purchase