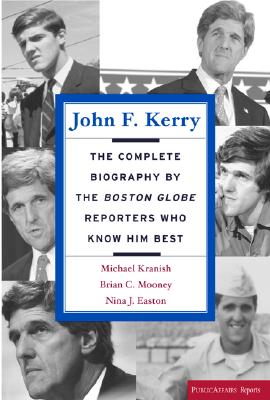 On Jan. 27, 2004, Senator John F. Kerry of Massachusetts accomplished one of the most spectacular turnarounds in modern American politics when he capped a surprise win in the Iowa caucus with a victory in the New Hampshire primary. The 2004 Democratic presidential nomination is now (in the words of Robert Novak) "John Kerry's to lose." Who is the man leading in the race to become the Democratic Party's nominee for president in 2004? And what kind of political leader is he?

The outlines of John Kerry's life are familiar: A decorated Vietnam veteran who became an influential, if unlikely, anti-war protester. A lanky 60-year-old who quenches his thirst for danger with high-speed kiteboarding, windsurfing, piloting, motorcycling, and, in some cases, driving. A senator with a reputation as an investigator and foreign policy expert. A man married to one of the richest women in America. But beyond this broad picture, Kerry is something of a mystery to the public, largely because of a complex yet riveting personal and professional history outlined in this book.

John F. Kerry: The Complete Biography, the first full and in-depth book about the candidate's life, is based on a highly regarded series on Kerry published in the Boston Globe, plus years of additional reporting. It will explore his background, his service in the military (including significant experiences omitted from Douglas Brinkley's bestselling Tour of Duty), his early legal and political career, his legislative record and the remarkable turnaround in his political fortunes during the 2004 election cycle. This incisive, frank look at Kerry's life, and at his strengths and liabilities, is important reading for anyone interested in the presidential campaign.

Michael Kranish, has worked for The Boston Globe for 20 years, including the last 16 in the newspaper's Washington Bureau. He was the White House reporter during the last two years of the presidency of George H.W. Bush and the first two years of Bill Clinton. He was the paper's national political reporter during the 1996 and 2000 campaigns. During the 2004 cycle, his work included a series of biographical stories about the candidates, including one on the life of Senator John F. Kerry. His other assignments with the Globe have included congressional reporter, New England reporter, and business writer. He previously worked for The Miami Herald and The Lakeland Ledger. A graduate of Syracuse University, he lives in Silver Spring, Md., with his wife, Sylvia, and two daughters, Jessica and Laura. Brian C. Mooney has been a reporter for newspapers in and around Boston for the past thirty-one years, the last sixteen at The Boston Globe. Prior to that, he wrote for The Boston Herald, The Sun of Lowell, and The Medford Daily Mercury. At the Globe, he has been city hall bureau chief, a member of the newspaper's award-winning Spotlight Team, and a political columnist. A graduate of the College of the Holy Cross, he resides with his wife, Rosemary Lappin, a local television news producer, in Andover, Mass., with their daughter. Nina J. Easton, deputy chief of the Boston Globe's Washington bureau, is author of the critically acclaimed Gang of Five: Leaders at the Center of the Conservative Ascendancy, which chronicles the rise to power of today's conservative movement. The Washington Post praised the book for telling the story of post-Reagan conservatism "more inventively, exhaustively, and entertainingly than anyone else." Easton's career also includes a decade at the Los Angeles Times, where her Sunday Magazine stories on issues ranging from poverty to politics earned a number of national awards. In addition, she is co-author of the 1982 best-selling book Reagan's Ruling Class: Portraits of the President's Top 100 Officials.
Loading...
or
Not Currently Available for Direct Purchase