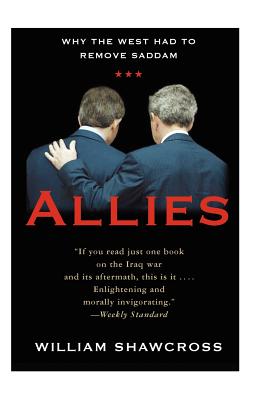 The U.S., Britain, and Europe in the Aftermath of the Iraq War

The Cold War certainties that had seemed so fixed in the 20th Century were overturned by the war in Iraq. Saddam Hussein's Republican Guards were the battlefield victims of a brutally quick war of shock and awe. No less shocked and awed were some of America's former allies: "old" Europe, large blocks of the UN, and half the G8 nations suddenly found themselves outside the chain of command and influence.

Bush, Blair, and their allies were driven by a new global vision. Their mission, expressed with great moral certainty, has been called imperialist. In fact, it was simply inevitable after 9/11: that terrible event ushered in a new era with new rules. Shawcross shows what the future will hold for Iraq, Israel, and the Middle East, how Western alliances will be changed forever, and demonstrates that the war was the definitive proof that a new era of 21st Century international politics has begun.

William Shawcross is a distinguished journalist who has covered international conflicts and conflict resolution, and bestselling author of many books including Sideshow: Kissinger, Nixon, and the Destruction of Cambodia; The Quality of Mercy: Cambodia, Holocaust, and Modern Conscience; Deliver Us from Evil: Warlords, Peacekeepers, and a World of Endless Conflict; Allies, and The Queen Mother. He is a chairman of Article 19, a London based charity and pressure group which defends the rights of free expression enshrined in Article 19 of the Declaration of Human Rights; a board member of the International Crisis Group; and was a member of the High Commissioner for Refugees' Informal Advisory Group from 1995-2000.
or support indie stores by buying on
Copyright © 2020 American Booksellers Association