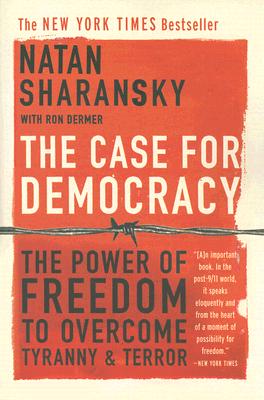 The Case For Democracy (Paperback)

The Power of Freedom to Overcome Tyranny and Terror

Natan Sharansky believes that the truest expression of democracy is the ability to stand in the middle of a town square and express one's views without fear of imprisonment. He should know. A dissident in the USSR, Sharansky was jailed for nine years for challenging Soviet policies. During that time he reinforced his moral conviction that democracy is essential to both protecting human rights and maintaining global peace and security.

Sharansky was catapulted onto the Israeli political stage in 1996. In the last eight years, he has served as a minister in four different Israeli cabinets, including a stint as Deputy Prime Minister, playing a key role in government decision making from the peace negotiations at Wye to the war against Palestinian terror. In his views, he has been as consistent as he has been stubborn: Tyranny, whether in the Soviet Union or the Middle East, must always be made to bow before democracy.

Drawing on a lifetime of experience of democracy and its absence, Sharansky believes that only democracy can safeguard the well-being of societies. For Sharansky, when it comes to democracy, politics is not a matter of left and right, but right and wrong.

This is a passionately argued book from a man who carries supreme moral authority to make the case he does here: that the spread of democracy everywhere is not only possible, but also essential to the survival of our civilization. His argument is sure to stir controversy on all sides; this is arguably the great issue of our times.

Natan Sharansky is a former Soviet dissident, political prisoner, and human rights icon who has spent his life championing democracy and freedom. He now serves as the Minister for Jerusalem and Diaspora Affairs in the Israeli Government.
or support indie stores by buying on
Copyright © 2020 American Booksellers Association