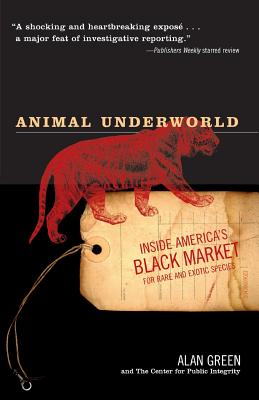 Inside America's Black Market for Rare and Exotic Species

A vast and previously undisclosed underground economy exists in the United States. The products bought and sold: animals. In Animal Underworld, veteran investigative journalist Alan Green exposes the sleazy, sometimes illegal web of those who trade in rare and exotic creatures. Green and The Center for Public Integrity reveal which American zoos and amusement parks dump their "surplus" animals on the middlemen adept at secretly redirecting them into the private pet trade. We're taken to exotic-animal auctions, where the anonymous high bidders are often notorious dealers, hunting-ranch proprietors, and profit-minded charlatans masquerading as conservationists. We visit some of the nation's most prestigious universities and research laboratories, whose diseased monkeys are "laundered" through this same network of breeders and dealers until they finally reach the homes of unsuspecting pet owners. And we meet the men and women who make their living by skirting through loopholes in the law, or by ignoring the law altogether. For anyone who cares about animals; for pet owners, zoo-goers, wildlife conservationists, and animal welfare advocates, Animal Underworld is gripping, shocking reading.

Alan Green is a veteran investigative reporter who was the founding editor of AlterNet, the news service for North America's alternative news weeklies. His reporting has won awards, including the Worth Bingham Prize for his work in New Republic magazine.

The Center for Public Integrity, based in Washington, D.C., is a nonpartisan, nonprofit organization that examines public service and ethics-related issues. Founded in 1989, the Center has completed more than thirty investigative reports, including the 1996 "Lincoln Bedroom" story profiling fundraisers and donors who had stayed overnight in the White House.
Loading...
or support indie stores by buying on