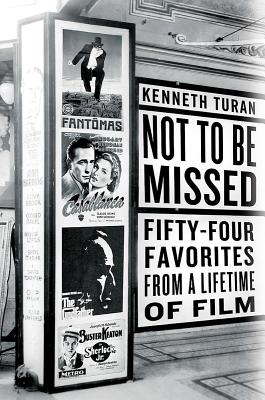 Not to Be Missed

Fifty-Four Favorites from a Lifetime of Film

The images and memories that matter most are those that are unshakeable, unforgettable. Kenneth Turan's fifty-four favorite films embrace a century of the world's most satisfying romances and funniest comedies, the most heart-stopping dramas and chilling thrillers. Turan discovered film as a child left undisturbed to watch Million Dollar Movie on WOR-TV Channel 9 in New York, a daily showcase for older Hollywood features. It was then that he developed a love of cinema that never left him and honed his eye for the most acute details and the grandest of scenes. Not to be Missed blends cultural criticism, historical anecdote, and inside-Hollywood controversy. Turan's selection of favorites ranges across all genres. From All About Eve to Seven Samurai to Sherlock Jr., these are all timeless films--classic and contemporary, familiar and obscure, with big budgets and small--each underscoring the truth of director Ingmar Bergman's observation that "no form of art goes beyond ordinary consciousness as film does, straight to our emotions, deep into the twilight room of the soul.

Kenneth Turan is the film critic for the Los Angeles Times and NPR's Morning Edition, as well as the director of the Los Angeles Times Book Prizes. He has been a staff writer for the Washington Post and TV Guide, and served as the Times' book review editor. A graduate of Swarthmore College and Columbia University's Graduate School of Journalism, he is the co-author of Call Me Anna: The Autobiography of Patty Duke. Turan teaches film reviewing and non-fiction writing at USC and is on the board of directors of the National Yiddish Book Center. His most recent books include Free for All: Joe Papp, The Public, and the Greatest Theater Story Ever Told and Never Coming To A Theater Near You. Turan lives in Los Angeles, CA. Follow him on Twitter @KennethTuran.