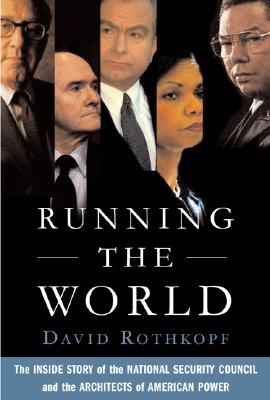 Never before in the history of mankind have so few people had so much power over so many. The people at the top of the American national security establishment, the President and his principal advisors, the core team at the helm of the National Security Council, are without question the most powerful committee in the history of the world. Yet, in many respects, they are among the least understood.

A former senior official in the Clinton Administration himself, David Rothkopf served with and knows personally many of the NSC's key players of the past twenty-five years. In Running the World he pulls back the curtain on this shadowy world to explore its inner workings, its people, their relationships, their contributions and the occasions when they have gone wrong. He traces the group's evolution from the final days of the Second World War to the post-Cold War realities of global terror -- exploring its triumphs, its human dramas and most recently, what many consider to be its breakdown at a time when we needed it most.

Drawing on an extraordinary series of insider interviews with policy makers including Condoleezza Rice, Colin Powell, Henry Kissinger, senior officials of the Bush Administration, and over 130 others, the book offers unprecedented insights into what must change if America is to maintain its unprecedented worldwide leadership in the decades ahead.

David Rothkopf is the CEO and editor of the FP Group, which is the publisher of Foreign Policy magazine, ForeignPolicy.com, and presenter of FP Events. He is also president and CEO of Garten Rothkopf, an international advisory firm. He is a visiting scholar at the Carnegie Endowment for International Peace, where he chairs the Bernard L. Schwartz Program in Competitiveness and Growth Policies.

He is the author of Power, Inc.: The Epic Rivalry Between Big Business and Government--and the Reckoning that Lies Ahead; Superclass: The Global Power Elite and the World They Are Making; and Running the World: The Inside Story of the National Security Council and the Architects of American Power.
or
Not Currently Available for Direct Purchase
Copyright © 2020 American Booksellers Association