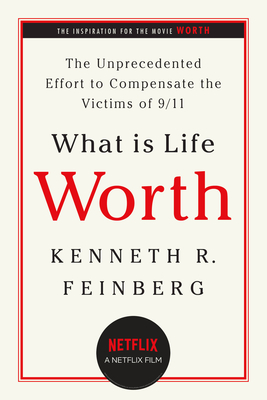 What Is Life Worth?

The Unprecedented Effort to Compensate the Victims of 9/11

The inspiration for the Netflix film 'Worth,' starring Michael Keaton, Stanley Tucci, and Amy Ryan: the true story of the man put in charge of the 9/11 Victim Compensation Fund, and a testament to the enduring power of family, grief, love, fear, frustration, and courage.

Just days after September 11, 2001, Kenneth Feinberg was appointed to administer the federal 9/11 Victim Compensation Fund, a unique, unprecedented fund established by Congress to compensate families who lost a loved one on 9/11 and survivors who were physically injured in the attacks. Those who participated in the Fund were required to waive their right to sue the airlines involved in the attacks, as well as other potentially responsible entities. When the program was launched, many families criticized it as a brazen, tight-fisted attempt to protect the airlines from lawsuits. The Fund was also attacked as attempting to put insulting dollar values on the lives of lost loved ones. The families were in pain. And they were angry. Over the course of the next three years, Feinberg spent almost all of his time meeting with the families, convincing them of the generosity and compassion of the program, and calculating appropriate awards for each and every claim. The Fund proved to be a dramatic success with over 97% of eligible families participating. It also provided important lessons for Feinberg, who became the filter, the arbitrator, and the target of family suffering. Feinberg learned about the enduring power of family grief, love, fear, faith, frustration, and courage. Most importantly, he learned that no check, no matter how large, could make the families and victims of 9/11 whole again.

Kenneth R. Feinberg, one of the nation’s leading lawyers, specializes in mediation and alternative dispute resolution and has helped to administer the response to some of the most complex public crises in recent American history, including Agent Orange, executive compensation following the 2008 financial crisis, the BP Deepwater Horizon Gulf oil spill, the Boston Marathon bombings, and, notably, the 9/11 Victims Compensation Fund.  A former prosecutor and member of two Presidential Commissions, he is also adjunct Professor of Law at Georgetown University, the University of Pennsylvania, Columbia University, and New York University. He lives in Washington D.C.
Loading...
or support indie stores by buying on