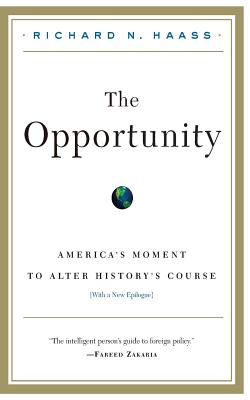 In this dramatic new perspective on international affairs, Richard N. Haass, one of the country's most brilliant analysts and able foreign policy practitioners, argues that it is hard to overstate the significance of there being no major power conflict in the world. America's great military, economic, and political power discourages traditional challenges; no ideological fault line divides the world into warring blocs. India, China, Japan, Russia, and Europe all seek a prolonged period of stability that would support economic growth.

The opportunity thus exists for unprecedented cooperation among the major powers. This is good, because they share vulnerabilities. Globalization, which promotes trade and investment and eases travel and communication, also facilitates the spread of viruses (human and computer alike), weapons, terrorists, greenhouse gases, and drugs. And the United States, for all its strength, cannot defeat these threats alone.

But opportunity is not inevitability. The question is whether the United States will be able to integrate other countries into global efforts against terrorism, the spread of nuclear weapons, genocide, and protectionist policies that jeopardize global economic prosperity. This compelling book explains why it must and how it can.

Richard N. Haass, president of the Council on Foreign Relations since July 2003, was previously director of policy planning for the Department of State, where he was a principal advisor to Colin Powell. From 1989-1993, he was special assistant to President George H. W. Bush and senior director for the Near East and South Asia on the staff of the National Security Council. Haass also served in the Reagan and Carter administrations. The recipient of the State Department's Distinguished Honor Award and the Presidential Citizens Medal, he is the author or editor of twelve other books. Haass lives in New York City.
or support indie stores by buying on
Copyright © 2020 American Booksellers Association