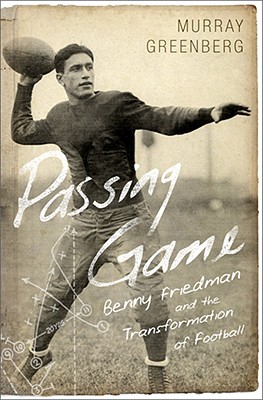 Benny Friedman and the Transformation of Football

Benny Friedman, the son of working class immigrants in Cleveland's Jewish ghetto, arrived at the University of Michigan and transformed the game of football forever. At the time, in the 1920s, football was a dull, grinding running game, and the forward pass was a desperation measure. Benny would change all of that.

In Ann Arbor, the rookie quarterback's passing abilities so eclipsed those of other players that legendary coach Fielding Yost came back from retirement to coach him. The other college teams had no answer for Friedman's passing attack. He then went pro--an unpopular decision at a time when the NFL was the poor stepchild to college football--and was equally sensational, eventually signing with the New York Giants for an unprecedented 10,000, bringing fans and attention to the fledgling NFL.

Passing Game rediscovers this little-known sports hero and tells the story of Friedman's evolution from upstart to American celebrity, in a vivid narrative that will delight and enlighten football fans of all ages.


Praise For Passing Game: Benny Friedman and the Transformation of Football…

Sports Illustrated, December 8, 2008
"Greenberg's rich, well-researched narrative chronicles the quarterback's rise from bench warmer to All-America at Michigan, his impact on the fledgling NFL and his journey from beloved Jewish icon to a forgotten star.”

Murray Greenberg is a former litigator and graduate of Brandeis University (where Benny Friedman was the first athletic director and only football coach), as well as Columbia University's Graduate School of Journalism.
Loading...
or
Not Currently Available for Direct Purchase