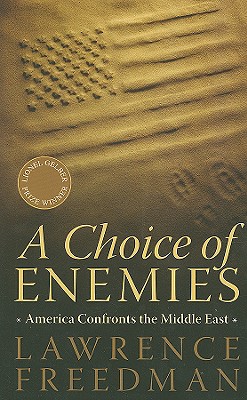 A Choice of Enemies

It is in the Middle East that the U.S. has been made to confront its attitudes on the use of force, the role of allies, and international law. The history of the U.S. in the Middle East, then, becomes an especially revealing mirror on America's view of its role in the wider world.

In this wise, objective, and illuminating history, Lawrence Freedman shows how three key events in 1978-1979 helped establish the foundations for U.S. involvement in the Middle East that would last for thirty years, without offering any straightforward or bloodless exit options: the Camp David summit leading to the Israel-Egypt Treaty; the Iranian Islamic revolution leading to the Shah's departure followed by the hostage crisis; and the socialist revolution in Afghanistan, resulting in the doomed Soviet intervention. Drawing on his considerable expertise, Freedman makes clear how America's strategic choices in those and subsequent crises led us to where we are today.

Lawrence Freedman is emeritus professor of War Studies at King's College London. Elected a fellow of the British Academy in 1995 and awarded the CBE in 1996, he was appointed official historian of the Falklands Campaign in 1997. He was awarded the KCMG in 2003. In June 2009, he was appointed to serve as a member of the official inquiry into Britain and the 2003 Iraq War.

Professor Freedman has written extensively on nuclear strategy and the Cold War, as well as commentating regularly on contemporary security issues. His book, Strategy, was a best book of 2013 in the Financial Times, A Choice of Enemies: America Confronts the Middle East won the 2009 Lionel Gelber Prize and Duke of Westminster Medal for Military Literature.
Loading...
or support indie stores by buying on