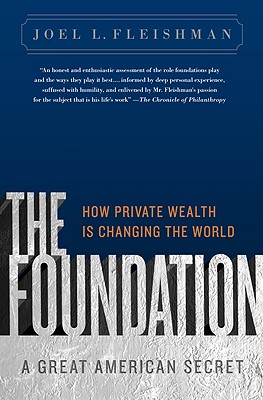 A Great American Secret; How Private Wealth is Changing the World

Foundations are a peculiarly American institution. They have been the dynamo of social change since their invention at the beginning of the last century. Yet they are cloaked in secrecy -- their decision-making and operations are inscrutable to the point of obscurity-leaving them substantially unaccountable to anyone. Joel Fleishman has been in and around foundations for almost half a century . . . running them, sitting on their boards, and seeking grants from them. And in this groundbreaking book he explains the history of foundations, tells the stories of the most successful foundation initiatives -- and of those that have failed -- and explains why it matters. The baby boomer generation is going to participate in the largest transfer of wealth in history when it passes on its assets to its successor generation. The third sector is about to become more powerful than ever. This book shows how foundations can provide a vital spur to the engine of the American, and the world's, economy -- if they are properly established and run.