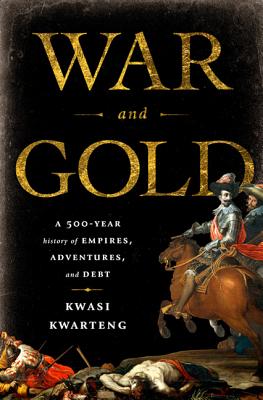 A Five-Hundred-Year History of Empires, Adventures, and Debt

The world was wild for gold. After discovering the Americas, and under pressure to defend their vast dominion, the Habsburgs of Spain promoted gold and silver exploration in the New World with ruthless urgency. But, the great influx of wealth brought home by plundering conquistadors couldn't compensate for the Spanish government's extraordinary military spending, which would eventually bankrupt the country multiple times over and lead to the demise of the great empire.

Gold became synonymous with financial dependability, and following the devastating chaos of World War I, the gold standard came to express the order of the free market system. Warfare in pursuit of wealth required borrowing -- a quickly compulsive dependency for many governments. And when people lost confidence in the promissory notes and paper currencies issued during wartime, governments again turned to gold.

In this captivating historical study, Kwarteng exposes a pattern of war-waging and financial debt -- bedmates like April and taxes that go back hundreds of years, from the French Revolution to the emergence of modern-day China. His evidence is as rich and colorful as it is sweeping. And it starts and ends with gold.

Praise For War and Gold: A Five-Hundred-Year History of Empires, Adventures, and Debt…

“This clever history of money weighs its enduring ability to destabilise society… For people brought up in the internet age, the concept of an economy propped up by a rock, a hill, a mountain of gold might seem quirky. If so, Kwarteng's detailed tracking of the shift from gold to paper will come as a revelation…. Kwarteng might not know how to stabilise a financial system that floats on credit, but he certainly understands the forces and the mistakes that have led to that destabilisation.”—The Observer (UK)

“Few stones are left unlifted in this study…The result is a retelling from a senior, political, financial viewpoint. It's high table or, to give a more modern description, c-suite stuff.”—The Independent (UK)

“A complicated story well told, from which financial lessons emerge naturally without Kwarteng finding it necessary to bludgeon the reader with his message.” —Financial Times (UK)

“Kwarteng is thorough and insightful, weaving a narrative that transports the reader convincingly through time and place. He points out that victory has just as much financial cost as defeat.”—London Evening Standard

“One strength is in the lucidity of Kwarteng's narrative style. War and Gold manages to sweeten the abstruse parts of his monetary history with anecdotes about the major actors.… Kwarteng has a flair for the elegant turn of phrase.”—New York Times Book Review

"War and Gold is a chronicle of fiscal ruination and redemption, with the emphasis on the former… Mr. Kwarteng, a heroic reader, has compiled a wonderful bibliography and gathered a colorful grouping of monetary characters to people his chapters.” —James Grant, Wall Street Journal

“This near-perfect volume appears with almost preternaturally perfect timing around the centenary of the beginning of World War I … War and Gold is a compelling successor to Liaquat Ahamed's delightful and invaluable The Lords of Finance, awarded the 2010 Pulitzer Prize in history. Kwarteng delivers up a successor volume worthy of such a prize. It extends Ahamed's temporal framework by a factor of ten, to 500 years. Kwarteng, too, has compelling narrative virtuosity. His book is full of dramatic, charming, often wry vignettes of fascinating characters — heroes and villains, adventurers and knaves — spinning around, and off, the axis of the gold standard, in war and in peace.” Ralph Benko, Forbes.com


This carefully documented, scholarly, well-written work provides an account of the development of international financial institutions over the past five centuries…Overall, the book is a captivating narrative of monetary history that starts and ends with gold.” — CHOICE

“A well-written history of money...It's refreshing to read such a concise and cutting book” —Jim Landers, Dallas Morning News

"The title's implications aside, this is really a history of money—thoroughly satisfying and remarkably accessible...While John Kenneth Galbraith's 1975 Money: Whence it Came, Where It Went remains the subject's touchstone, Kwarteng superbly brings that volume up to date in explaining the almost unexplainable." —Publishers Weekly, starred review

“Absorbing… a fascinating, lucid and serious history of money, from the discovery of the wealth of the Americas to the present financial crisis.”—The Times (UK)

“Enormously entertaining… so engagingly written that readers of all political persuasions should enjoy it.”—Sunday Times (UK)

Kwasi Kwarteng was born in London in 1975. He earned a PhD in History from Cambridge University in 2000. Kwasi was elected as the Conservative Member of Parliament for Spelthorne in 2010 and sat on the House of Commons Transport Select Committee from 2010 to 2013; he currently sits on the House of Commons Work and Pensions Select Committee. His first book, Ghosts of Empire, was published to critical acclaim by Bloomsbury in the UK and PublicAffairs in US in August, 2011. His second book, War and Gold, was published in May, 2014.
Loading...
or
Not Currently Available for Direct Purchase