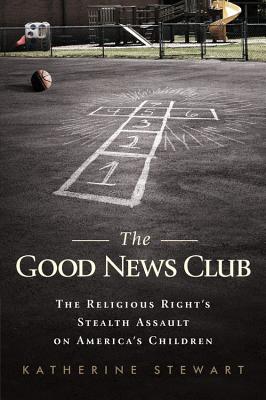 In 2009, the Good News Club came to the public elementary school where journalist Katherine Stewart sent her children. The Club, which is sponsored by the Child Evangelism Fellowship, bills itself as an after-school program of “Bible study.” But Stewart soon discovered that the Club's real mission is to convert children to fundamentalist Christianity and encourage them to proselytize to their “unchurched” peers, all the while promoting the natural but false impression among the children that its activities are endorsed by the school.

Astonished to discover that the U.S. Supreme Court has deemed this—and other forms of religious activity in public schools—legal, Stewart set off on an investigative journey to dozens of cities and towns across the nation to document the impact. In this book she demonstrates that there is more religion in America's public schools today than there has been for the past 100 years. The movement driving this agenda is stealthy. It is aggressive. It has our children in its sights. And its ultimate aim is to destroy the system of public education as we know it.

Katherine Stewart was born in Boston, Massachusetts. She started her career in journalism working for investigative reporter Wayne Barrett at The Village Voice, and contributed to Newsweek International, the New York Observer, and Rolling Stone among others. She cowrote the book about the musical Rent and, after moving to Santa Barbara in 2005, published two novels about 21st century parenting. She is the author of The Good News Club (PublicAffairs, 2012), an investigative book about public education and religious fundamentalism in America. Most recently she has written for The New York Times, The Nation, The Atlantic, The Guardian.

Minneapolis Star Tribune
“Stewart is a gracious narrator, respectful of the religious and nonreligious participants she came across during her quite vast research. In sum, the book is an important work that reveals a movement little discussed in the mainstream media, one Stewart worries is poised to damage "a society as open and pluralistic as ours.”
DBC reads
“The reason the world perked up and paid attention to Sinclair’s The Jungle in 1906 is the same reason that the world should now, 105 years later, snap to attention and read Katherine Stewart’s latest nonfiction book, The Good News Club: it awakens us to something we may previously have known nothing about, but which is under our noses every day, is active in our communities nonstop, and is potentially damaging to us all, and well into the future, too, if gone unnoticed. Stewart’s findings can’t afford to be ignored, for the same simple fact that made Sinclair’s expose crucial: whether the book calls you to action or not, you are inarguably worse off not knowing what’s detailed within it.”
The Friendly Atheist
or
Not Currently Available for Direct Purchase
Copyright © 2020 American Booksellers Association