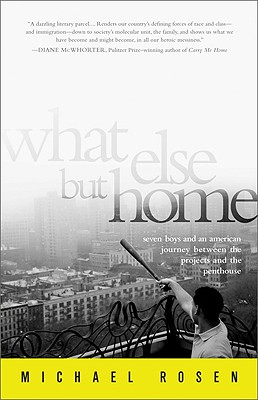 What Else But Home (Paperback)

By Michael Rosen (Other primary creator)

Michael Rosen's seven-year-old son Ripton one day decided to join a pick-up game of baseball with some older kids in the park. At the end of the game Ripton asked his new friends if they wanted to come back to his house for snacks and Nintendo. Over time, five of the boys -- all black and Hispanic, from the impoverished neighborhood across the park -- became a fixture in the Rosens' home and eventually started referring to Michael and his wife Leslie as their parents. The boys began to see the Rosens as more than just an arcade of middle-class creature comforts; the Rosens began to learn the full stories of the boys' fractured lives.

Soon Michael and Leslie decided that their responsibility, like that of parents everywhere, was to help all their boys get a start in life. So began a turbulent learning experience all round, beautifully and movingly depicted in What Else But Home. It's a quest to escape the previously inevitable, a test of the resilience of a newly assembled family, a love story unlike any other, and a celebration of the fact that, whatever our differences, baseball and commitment can help us bridge them.

Michael Rosen, a community organizer, is the author of Turning Words, Spinning Worlds. He has been a real estate developer and investor, CEO on Wall Street and in the public sector, and an assistant professor at New York University. He lives in New York with his wife, Leslie Gruss, and helps raise the extended Rosen family.
or support indie stores by buying on
Copyright © 2020 American Booksellers Association