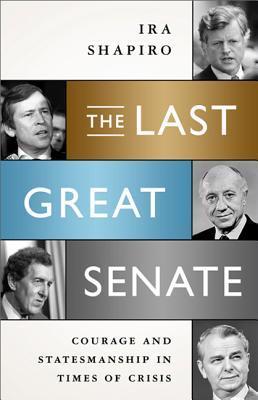 Courage and Statesmanship in Times of Crisis

Journalists have called the U.S. Senate an empty chamber; politicians have lamented that the institution is broken--yet the Senate was once capable of greatness. Senators of the 1960s and '70s overcame southern opposition to civil rights, passed Great Society legislation, and battled the executive branch on Vietnam, Watergate, and its abuses of power. The right's sweep of the 1980 elections shattered that Senate, leaving a diminished institution in its wake.

Ira Shapiro spent 12 years working for Senators Gaylord Nelson, Abraham Ribicoff, Thomas Eagleton, Robert Byrd, and Jay Rockefeller. "The Last Great Senate" is his vivid portrait of the statesmen who helped steer America during the crisis years of the late 1970s, transcending partisanship and overcoming procedural roadblocks that have all but strangled the Senate since their departure. "The Last Great Senate" is necessary reading for all those who wonder how the Senate used to work and what happened to the world's greatest deliberative body.


Praise For The Last Great Senate: Courage and Statesmanship in Times of Crisis…

Steven R. Weisman, Author of The Great Tax Wars"With his gift for lively narrative and vivid character study, Ira Shapiro brings to life a forgotten, unappreciated and surprisingly productive period of modern political history, when the Senate served as a 'national mediator' for the great issues of the day. The Last Great Senate is peopled with great personalities, from Ted Kennedy to Scoop Jackson to Hubert Humphrey, and from Howard Baker to Jack Javits and Bob Dole. It is bound to become a classic in the field of studies of how legislation is made, presidencies are unmade and results flow from calculation, courage and determination to rise above the fray in times of economic and national security crises."
Madeleine K. Albright, U.S. Secretary of State, 1997-2001
“By reminding us of what the U.S. Senate was, Ira Shapiro awakens us to what this increasingly shaky pillar of American democracy still could be.  In so doing, he gives us not only a riveting historical account, but also a prescription of how to restore health to our political system and true patriotism to public debate.” Publishers Weekly
“In his chronicle of Beltway politics, Shapiro’s excellent account of wise, capable U.S. senators putting constitutional concerns over party and ideology to do the people’s business is a prime example of how Washington can overcome its present deadlock." Library Journal“Shapiro’s thorough analysis and background stories of these senators remind readers that the Senate once worked despite partisanship. Readers interested in political science and government history will enjoy the author’s engaging style and historical perspective.” Boston Globe
"A sharply focused and instructive look back at the institution’s bipartisan achievements of the late 1970s. The Senate that served during the uneasy years of the Carter administration was the last, in author Shapiro’s estimation, to make hard decisions on a series of volatile issues not for political gain but for the good of the nation. The contrast to the political and personal rancor of recent years could not be more apparent.”

Christian Science Monitor
“A first-hand, blow-by-blow account of the personalities and issues that animated the Senate during the Carter administration…. There is something surprisingly thrilling about it all…. There is no mistaking that the Senate operated differently 30 years ago than it did today and Shapiro persuasively shows that most of that change has been for the worse. As a result, his book begs the questions: Is the root of that change in our leaders or is it in us? And can it be reversed?”

History News Network
“Fascinating…. The Last Great Senate provides an alluring account of a functional Senate. Citizens might profitably read it to appreciate that ideal, and then send their copy to their senators to suggest models for better behavior. Those might be first steps to shaping the next great Senate.”

Cleveland Plain Dealer
“If today's voters want a sure-handed explanation of how the once-consequential debate in the U.S. Senate degenerated into a low-comedy revue, Shapiro's book offers it -- powerfully.”

St. Louis Post-Dispatch“Shapiro, a former Democratic Senate staff aide, argues persuasively that the crucial middle ground needed for compromise in the 100-member elite body of Congress has disappeared.” Philadelphia Inquirer“Given the desire to escape today's toxic Washington culture, there may be no timelier book than Ira Shapiro's The Last Great Senate…. And there may be no more appropriate writer to pen such a title than Shapiro. A senior Senate aide who brokered legislative compromises among leading Democrats and Republicans, Shapiro worked behind the scenes on matters ranging from the Foreign Intelligence Act to the Senate Code of Ethics. In elegant, if sometimes dense, prose, The Last Great Senate fulfills its promises to chronicle ‘courage and statesmanship in times of crisis’- specifically, the last half of the 1970s, when a series of signal compromises were worked out by senators of very different ideologies. The book is for the 112th Congress (the one now sitting) what then-Sen. John F. Kennedy's Profiles in Courage was for the nation's Cold War leaders.…. Congress and all its members should read this methodically researched book. And not only them; political junkies and all those concerned about the direction of the nation will also want to immerse themselves in it. But for the country's sake, let's hope each and every U.S. senator reads The Last Great Senate before the next vote.”

Washington Post
“A tour-de-force meditation on the kind of high-powered policymaking and intricate legislative needlepoint that once seemed to define the Senate’s work…. The charm of the book is that [Shapiro] understands and is devoted to the old myths and warmly recounts a period in history when the institution was still trying to live up those myths, and when the country went along by revering the Senate and its members. Shapiro is an ardent researcher and a more than able writer, but it is his obvious love for the Senate that gives the book its personality. He manages to make Senate debates about energy policy and tax rebates seem interesting, in part because he explains who felt ambushed, betrayed and left hung out to dry. … The real pleasure of the book is the way it takes us back to an era without the current madness.”

Ira Shapiro came to Washington in 1975 and spent 12 years working in senior positions in the Senate, playing important roles in accomplishments as diverse as the Foreign Intelligence Surveillance Act, the Senate Code of Ethics, and completing the Metrorail system. During the Clinton administration, he served as a leading U.S. trade negotiator, ultimately earning the rank of ambassador. He lives in Potomac, Maryland.
Loading...
or
Not Currently Available for Direct Purchase