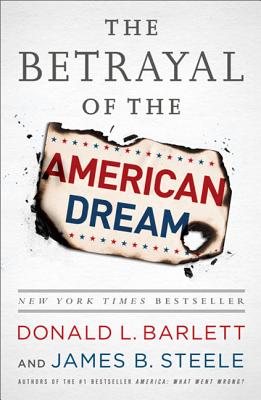 The Betrayal of the American Dream (Hardcover)

A "New York Times" bestseller
America's unique prosperity is based on its creation of a middle class. In the twentieth century, that middle class provided the workforce, the educated skills, and the demand that gave life to the world's greatest consumer economy. It was innovative and dynamic; it eclipsed old imperial systems and colonial archetypes. It gave rise to a dream: that if you worked hard and followed the rules you would prosper in America, and your children would enjoy a better life than yours. The American dream was the lure to gifted immigrants and the birthright opportunity for every American citizen. It is as important a part of the history of the country as the passing of the Bill of Rights, the outcome of the battle of Gettysburg, or the space program. Incredibly, however, for more than thirty years, government and big business in America have conspired to roll back the American dream. What was once accessible to a wide swath of the population is increasingly open only to a privileged few. The story of how the American middle class has been systematically impoverished and its prospects thwarted in favor of a new ruling elite is at the heart of this extraordinarily timely and revealing book, whose devastating findings from two of the finest investigative reporters in the country will leave you astonished and angry.

Donald L. Barlett and James B. Steele are the nation's most honored investigative reporting team, and authors of the New York Times bestseller America: What Went Wrong? They have worked together for more than forty years, first at the Philadelphia Inquirer (1971-1997), then at Time magazine (1997-2006), and now at Vanity Fair since 2006. They have also written seven books. They are the only reporting team ever to have received two Pulitzer Prizes for newspaper reporting and two National Magazine Awards for magazine work. They live in Philadelphia.

Praise For The Betrayal of the American Dream…

Columbia Journalism Review
“The dedication reveals the emotional heart of their enterprise: Not merely number-crunching chroniclers of middle-class decline, they are invested in the fate of the people who exemplify it. Barlett and Steele’s preeminent talent is their knack for combining the micro and the macro. They look systemically at issues and policies, from the US tax code to healthcare. The questions they ask are both pragmatic (Does the system work?) and ideological (Who is benefiting, and at whose expense?). Their conclusions are buttressed by details gleaned from public records. But they also use the paper trail to track down the system’s apparent victims…the laid-off, the discarded, the pensionless, and the uninsured.”

Publishers Weekly
“The ostensibly willful destruction of the American middle class is laid bare in this villains and underdogs story from the Pulitzer Prize-winning reporting duo…for folks bowled over by the recent financial meltdown, Barlett and Steele's book will resonate.”

Leonard Downie, Philadelphia Inquirer
“Just in time for this year's election, Donald L. Barlett and James B. Steele are continuing the crusade to save the American middle class that they began two decades ago as star investigative reporters at The Philadelphia Inquirer….At a time when the future of investigative reporting is at risk in the digital reconstruction of American news media, Barlett and Steele could once again pioneer new ways of doing it, as they did in part through this collaboration with the Investigative Reporting Workshop. In any event, the publication of The Betrayal of the American Dream during the home stretch of the national political campaign injects a provocative populist imperative into an increasingly intense and perhaps decisive partisan debate over the fate of the American middle class.”

Associated Press
“The avuncular pair, renowned for chillingly accurate, if uncomfortable, observations, have meticulously sharpened their analysis. Now, four decades of mistaken tax and trade policy, declining public and private investment and willing disregard of existing laws have crippled many American industries and sent thousands upon thousands of U.S. jobs overseas without cause, they say. Given the power of their past groundbreaking work on health care, the economy and other political hot potatoes that shape how all Americans live, ‘‘Betrayal’’ merits a careful read from anyone concerned about the nation’s economic future. It is almost haunting…They dissect one industry after another with the precision and narrative flair that have won them many awards, including two Pulitzers.…The writers conclude with a cogent plan for substantial, specific changes to rehabilitate the American dream and rescue the middle class."

Mary Sanchez, Kansas City Star
"If ever there were a time to pitch a national read-in, this is it...The text we should all be reading is ‘The Betrayal of the American Dream,’ by the reporting team of Donald L. Barlett and James B. Steele. Published this month, the book is a nuanced and well-researched report on the crisis of the American middle class.”

Shepherd Express
“The Betrayal of the American Dream is an angry book, denouncing the lies of corporate America and the elected officials it keeps on a leash woven from money.”

DailyKos
“The team of Barlett and Steele have produced excellent journalism in the past, and they have done it again with The Betrayal of the American Dream, (2012) an analysis of the pain caused by the economic crisis for everyday people.  This is a well written, readable book on the economic crisis and the 30 years of looting by corporate America that led to the crisis… The authors, excellent investigative journalists, place human faces on the devastation being wrought in our economy, and the pain and suffering imposed on the many by the few. It is a book well worth reading.”

Washington Post
“A brawling, journalistic mix-it-up…The authors’ passion and anger are as clear in these pages as they are in the title.”

Irish Times
“Urgent reading for anyone interested in contemporary America, not least as [a] stark reminder… of what is barely being discussed in the presidential election.”

Creative Loafing Charlotte
“Thank God for writers who are able to show the effects of political decisions on ordinary Americans. Two of the very best are Donald R. Barlett and James B. Steele, …They shine again in their new book, The Betrayal of the American Dream (PublicAffairs, 306 pages, $26.99), in which America's overarching economic and political trends of the past 30 years are laid out clearly in intensely researched detail.”

The Progressive
“Barlett and Steele cover a lot of ground in this relatively short, fast-paced new book. Their straightforward, impassioned prose is filled with real-life stories of people who are losing their grip on the American Dream. "


New York Times Book Review“Barlett and Steele… have some intelligent things to say about the unfairness and impenetrability of the American tax code, which favors the wealthy and llows dangerous accounting for corporate pension liabilities….The book is strongest, and most useful, when it recounts the poignant stories of workers left out in the cold, chilling examples of exactly how far members of the middle class have fallen.  The book will undoubtedly make you angry.”

USA Today“Barlett and Steele are superb researchers and clear writers.”

HuntingtonNews.net“The Betrayal of the American Dream is an outstanding explanation of what we've done wrong, with suggestions on how we can stem the flow of our nation's life blood and bring back good paying jobs that are the foundation of a rapidly disappearing middle class.”
USA Today “When James B. Steele and Donald L. Barlett met as young reporters at the Philadelphia Inquirer  during 1971, nobody, including themselves, would have predicted they would spend the next 41 years (and counting) exposing illegal and ethical misbehavior inside the corporate-government nexus… Especially poignant in the wake of the Great Recession that officially ended in June 2009 but has barely abated for countless millions of U.S. residents… Using memorable anecdotes gleaned from deep reporting, Barlett and Steele show how the ruling class has instituted policies that mean the near abandonment in the job market for returning military veterans who fought in Afghanistan and Iraq.”
or
Not Currently Available for Direct Purchase
Copyright © 2020 American Booksellers Association