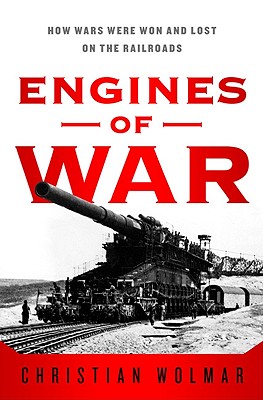 How Wars Were Won & Lost on the Railways

The dramatic 100-year history of how trains became weapons, and transformed forever the nature of war


Praise For Engines of War: How Wars Were Won & Lost on the Railways…

Publishers Weekly
“Wolmar writes with an authoritative tone and solid research on how railroads, with their ability to move vast numbers of troops, made "industrial-scale carnage possible."

Library Journal
“Very accessible and likely to be popular with readers of general military history.”

Christian Wolmar is a writer and broadcaster specializing in the social history of railroads and transportation. He has written for major British newspapers for many years and has contributed to many other publications, including the New York Times and Newsday. He frequently appears on TV and radio as an expert commentator. His most recent books are Blood, Iron, and Gold, about how the railroads transformed the world; The Subterranean Railway, a history of the London Underground, the world's oldest system, and Fire & Steam, the story of Britain's railroads.
Loading...
or
Not Currently Available for Direct Purchase