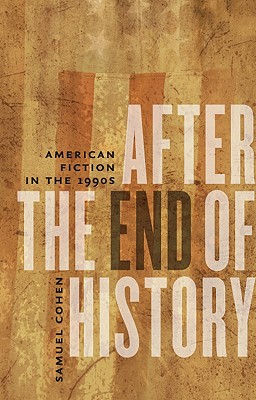 After the End of History

American Fiction in the 1990s

In this bold book, Samuel Cohen asserts the literary and historical importance of the period between the fall of the Berlin wall and that of the Twin Towers in New York. With refreshing clarity, he examines six 1990s novels and two post-9/11 novels that explore the impact of the end of the Cold War: Pynchon's Mason & Dixon, Roth's American Pastoral, Morrison's Paradise, O'Brien's In the Lake of the Woods, Didion's The Last Thing He Wanted, Eugenides's Middlesex, Lethem's Fortress of Solitude, and DeLillo's Underworld. Cohen emphasizes how these works reconnect the past to a present that is ironically keen on denying that connection. Exploring the ways ideas about paradise and pastoral, difference and exclusion, innocence and righteousness, triumph and trauma deform the stories Americans tell themselves about their nation’s past, After the End of History challenges us to reconsider these works in a new light, offering fresh, insightful readings of what are destined to be classic works of literature.

At the same time, Cohen enters into the theoretical discussion about postmodern historical understanding. Throwing his hat in the ring with force and style, he confronts not only Francis Fukuyama’s triumphalist response to the fall of the Soviet Union but also the other literary and political “end of history” claims put forth by such theorists as Fredric Jameson and Walter Benn Michaels. In a straightforward, affecting style, After the End of History offers us a new vision for the capabilities and confines of contemporary fiction.

Praise For After the End of History: American Fiction in the 1990s…

"Samuel Cohen's After the End of History reminds us that in the decade before September 11 several major figures in American literature, including Roth, Pynchon, Morrison, and DeLillo, published novels on historical themes. Cohen's insightful and sophisticated reading of these works reveals how these novelists, in writing about history, helped to make history. This is an important book for anyone interested in historical narrative and American culture." —Louis P. Masur, author, The Soiling of Old Glory: The Story of a Photograph That Shocked America

“Samuel Cohen’s After the End of History offers deeply insightful readings of eight major American novels of the 1990s and early twenty-first century. With their historical focus, Cohen convincingly argues, these novelists offered penetrating critiques of triumphalist and edenic myths about America’s distant and more recent past. In doing so, they cast a skeptical eye on the nation’s edgy post–Cold War mood and reflected uneasily on what might lie ahead. Cohen brings to his work sharply honed critical skills, a generous and humane spirit, and a refreshingly accessible prose style. I thoroughly enjoyed this fine book.”—Paul Boyer, author, By the Bomb’s Early Light: American Thought and Culture at the Dawn of the Atomic Age

“Cohen is blessed with a lucid style, and he knows the work of his writers—Pynchon, Roth, Morrison, O'Brien, Didion, among others—in real depth. Without question-begging, ellipticism, or modish opacity, he engages in sophisticated arguments and offers fresh, subtle, theoretically informed readings of important texts. Stimulating, thoughtful, and persuasive, After the End of History will be an important book.”—David Cowart, author, Trailing Clouds: Immigrant Fiction in Contemporary America and Don DeLillo: The Physics of Language

Samuel Cohen, assistant professor of English at the University of Missouri, is editor of 50 Essays: A Portable Anthology and the forthcoming Literature: The Human Experience.
Loading...
or
Not Currently Available for Direct Purchase