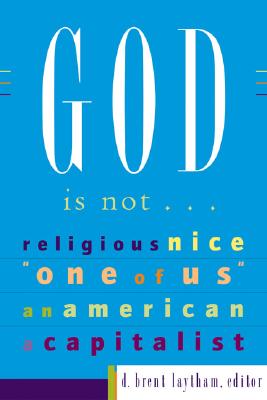 Religious, Nice, "One of Us," an American, a Capitalist

God Is Not . . . takes on today's prevailing misconceptions about who God is by boldly stating who God is not. Rodney Clapp critiques pop culture's anthem to a slobby, ineffective "God like us," while D. Stephen Long, in "God Is Not Nice," questions our therapy-fed longing for a useful, nonthreatening deity. If God is not an American or a capitalist or "religious," as contributors Michael Baxter, Mike Budde, and William T. Cavanaugh go on to argue, then who is God? Laytham concludes with a stirring essay on who God is, calling the church to visibly demonstrate where its primary allegiance lies. Audacious without being rude, God Is Not . . . is a lively, necessary, and intelligently reverent read.

D. Brent Laytham is dean of the Ecumenical Institute of Theology at St. Mary'sSeminary & University in Baltimore, Maryland. He earned his Ph.D. in theology and ethics from Duke University. An ordained minister in the United Methodist Church, Laytham takes special interest in bringing pastors and scholars together to address theological and ecclesiological issues.
Loading...
or
Not Currently Available for Direct Purchase