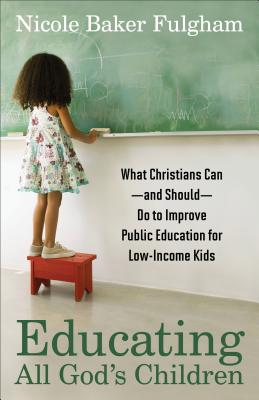 Children living in poverty have the same God-given potential as children in wealthier communities, but on average they achieve at significantly lower levels. Kids who both live in poverty and read below grade level by third grade are three times as likely not to graduate from high school as students who have never been poor. By the time children in low-income communities are in fourth grade, they're already three grade levels behind their peers in wealthier communities. More than half won't graduate from high school--and many that do graduate only perform at an eighth-grade level. Only one in ten will go on to graduate from college. These students have severely diminished opportunities for personal prosperity and professional success. It is clear that America's public schools do not provide a high quality public education for the sixteen million children growing up in poverty.

Education expert Nicole Baker Fulgham explores what Christians can--and should--do to champion urgently needed reform and help improve our public schools. The book provides concrete action steps for working to ensure that all of God's children get the quality public education they deserve. It also features personal narratives from the author and other Christian public school teachers that demonstrate how the achievement gap in public education can be solved.

Nicole Baker Fulgham (PhD, UCLA) is president and founder of The Expectations Project, a national organization that mobilizes people of faith to support public education reform and close the academic achievement gap. She is the former vice president of faith community relations at Teach For America and has appeared on CNN and ABC News. Baker Fulgham was named to the list of "50 Women to Watch: Those Most Shaping the Church and Culture" by Christianity Today and one of "14 Faith Leaders to Watch in 2014" by the Center for American Progress. She lives in the Washington, DC area.
Loading...
or support indie stores by buying on